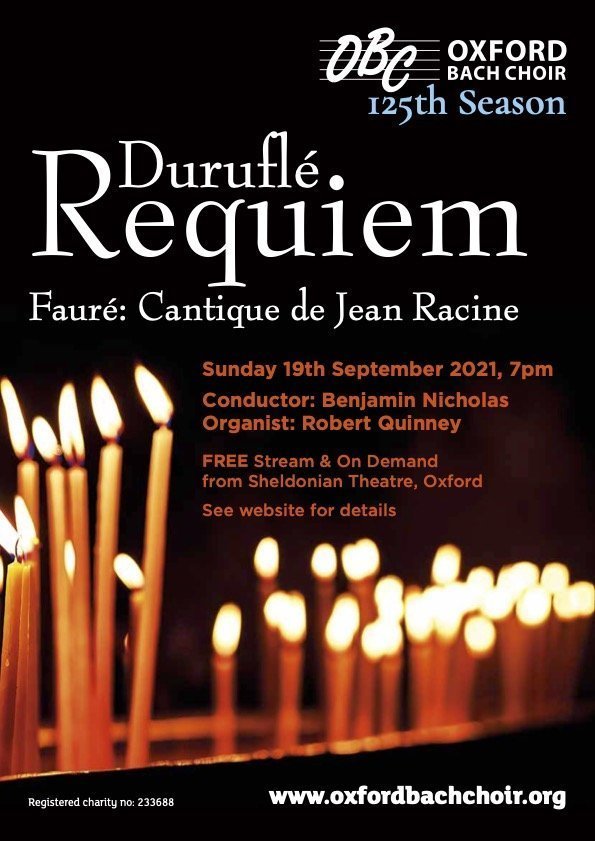 Oxford Bach Choir perform two popular choral French masterpieces in a concert to be streamed free from the Sheldonian Theatre.

Oxford Bach Choir online concert of Fauré: Cantique de Jean Racine and Duruflé: Requiem will be performed on Sunday 19 September and can be accessed in a live stream directly from the Sheldonian Theatre.

The performance is dedicated to the memory of all who have died and those who have lost loved ones during the pandemic. The free concert is also a celebration of the work of Oxford’s scientists and health care professionals, who have made such exceptional advances against COVID-19. The online performance will include a JustGiving link to Oxford Hospitals Charity.

Gabriel Fauré composed his Cantique de Jean Racine in 1865 when he was only 20 and still a student, but its gentle simplicity has long made it one of his best-loved works.

Maurice Duruflé’s Requiem dates from 1947 when its composer was at the peak of his powers. In this work, Duruflé followed Fauré in avoiding the dramatic fire and brimstone, which we find in the settings of the Requiem by Verdi or Berlioz, but instead produced a more meditative and consolatory piece.

Duruflé had a lifelong fascination with plainchant, and his setting of the Requiem is filled with traditional Gregorian melodies, all adorned with new and beautiful harmonies.

Approximate running time of 75 minutes with no interval.

This is an online concert only and will be free of charge to watch. You can access the concert on Sunday by clicking on this link below.