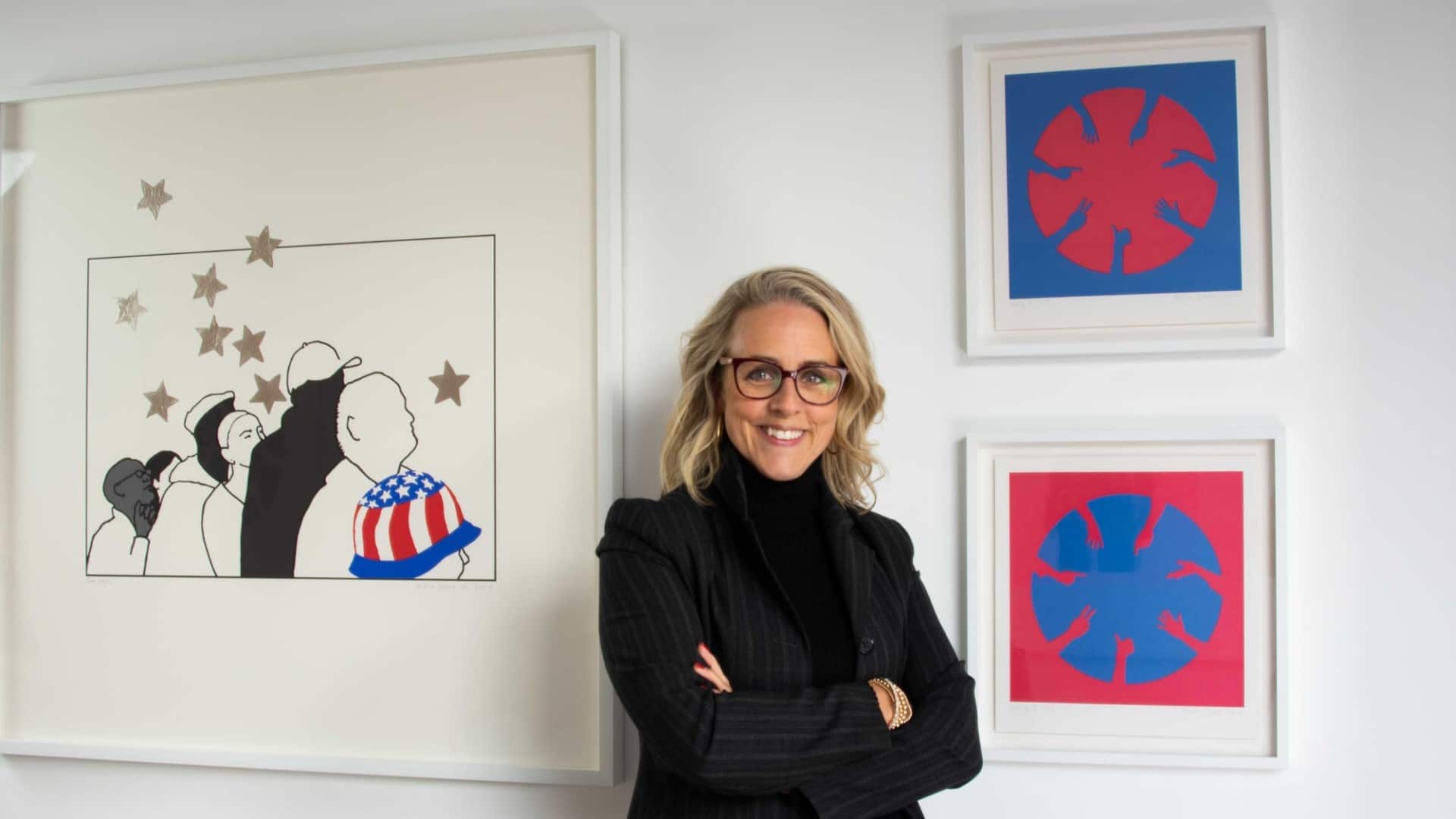 Nicola Green at the exhibition, Unity, at Zuleika Gallery in Woodstock

To mark the inauguration of President Biden on 20 January 2021, Zuleika Gallery is delighted to present 'Nicola Green - Unity', an exhibition of work by the British artist and social historian, related to the time when the artist witnessed, first-hand, Barack Obama’s meteoric ascent to power as the first African-American President of the United States in 2008.

Due to COVID-19 restrictions, the exhibition will continue to be installed at the gallery but will be presented virtually, via video, and virtual viewing appointments. An artist talk with Nicola Green will be hosted on Zoom during the exhibition.

At a time when we are facing deep divisions across our societies, shaped by intensely partisan politics, and social and economic inequality, this exhibition is a reminder that when people come together they can achieve the seemingly impossible. The two new works created in 2020, Unity I & II, are a celebration of the democratic process, a commemoration of change, and a symbol of hope.

The iconography in these artworks is derived from Day 1, Light, the first of the seven silkscreen prints from Nicola’s critically acclaimed series 'In Seven Days…' for which Nicola created the symbol of the seven hands, with different gestures, united in a circle of light. This is a powerful example of how non-verbal gestures embody and communicate so beyond words.

The imagery represents the long arc of history, it can take generations to enact meaningful change and many years before the impact is truly understood. The original design was inspired by the Democratic National Convention which took place on the 28 August 2008, a hugely significant date in African American history. It was not only the day President Obama accepted the Democratic nomination but also the passing of the UK Slavery Abolition Act in 1833 and the date of Martin Luther King's "I Have a Dream" speech in 1963.

The iconic design in Unity I & II has been reproduced in red, white, and blue. It has taken on a new level of meaning, representing pride, freedom, heritage, liberty and justice. 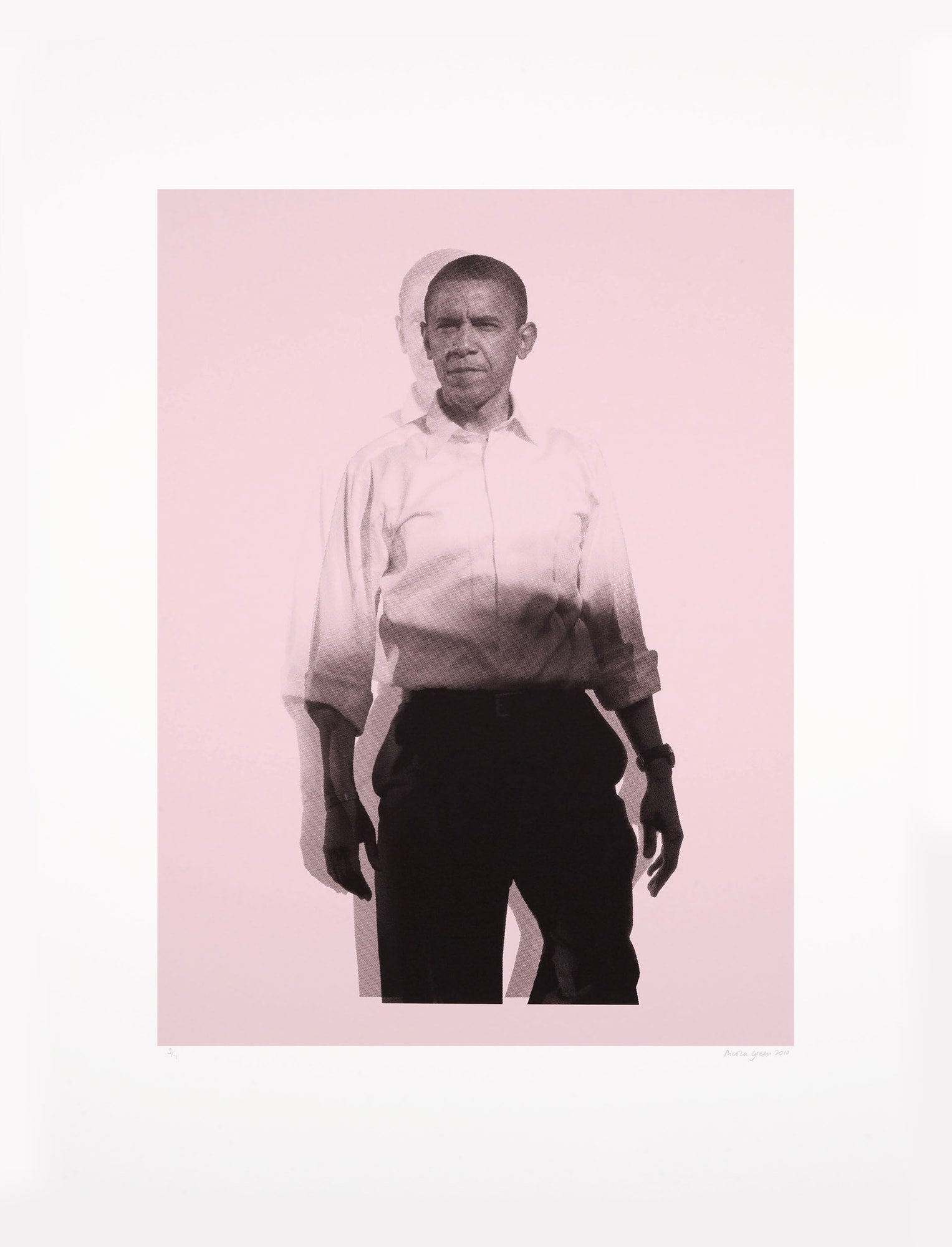 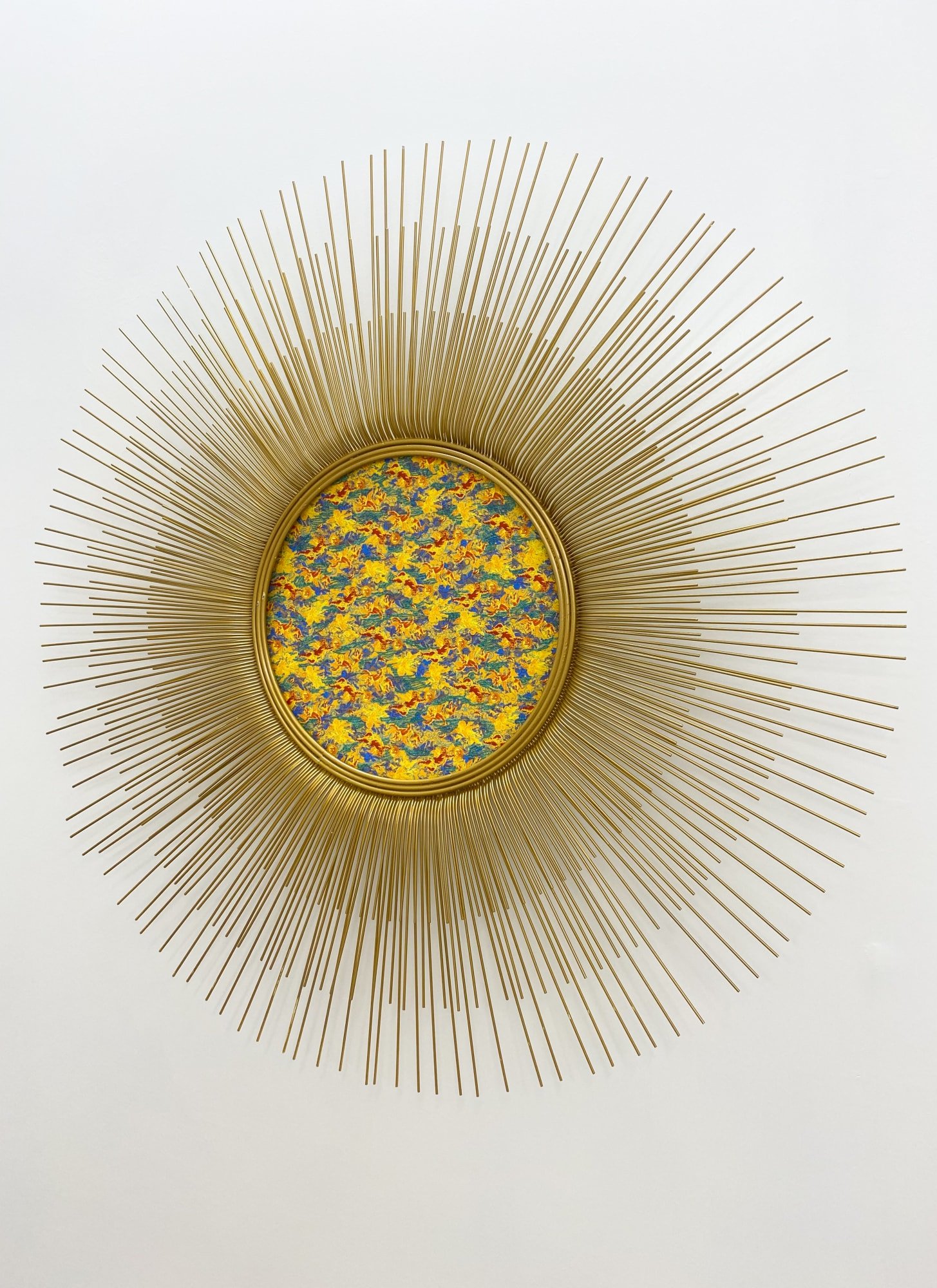 Between August 2008 and January 2009, Nicola witnessed Barack Obama’s meteoric ascent to power as the first African-American President of the United States. Over six trips across the country, Nicola gained unprecedented artistic access to President Obama’s monumental campaign. From the infamous DNC nomination speech in Denver to election night in Chicago to the inauguration in Washington, D.C. Nicola was behind-the-scenes taking photographs, making sketches, and having conversations with press, staff and citizens.

Nicola’s intention was to make a portrait of the Presidential hopeful, to understand why this story had captured the interest of the entire world. As the story began to unfold she was struck by the implications Obama’s campaign would have for future generations, and particularly for her three children who, like President Obama, have mixed heritage.

“I began to think deeply when I was pregnant with our first son about how my children would experience the world differently to me by virtue of the colour of their skin. I wanted to understand what that would mean for them. So I started thinking about role models, how the world would see them, how they would see the world” says Nicola.

Nicola focused on her role as a witness on behalf of her children. She watched President Obama speak at his 2008 DNC nomination, on the 45th anniversary of Martin Luther King’s momentous ‘I have a Dream’ address. Nicola began to reflect on the wider trajectory of the history of Obama’s campaign. She realised it would be many years until we could truly understand the impact, across the world, of Obama’s election on the next generation. She spent years reflecting upon what she had witnessed, and what she had recorded before creating In Seven Days... 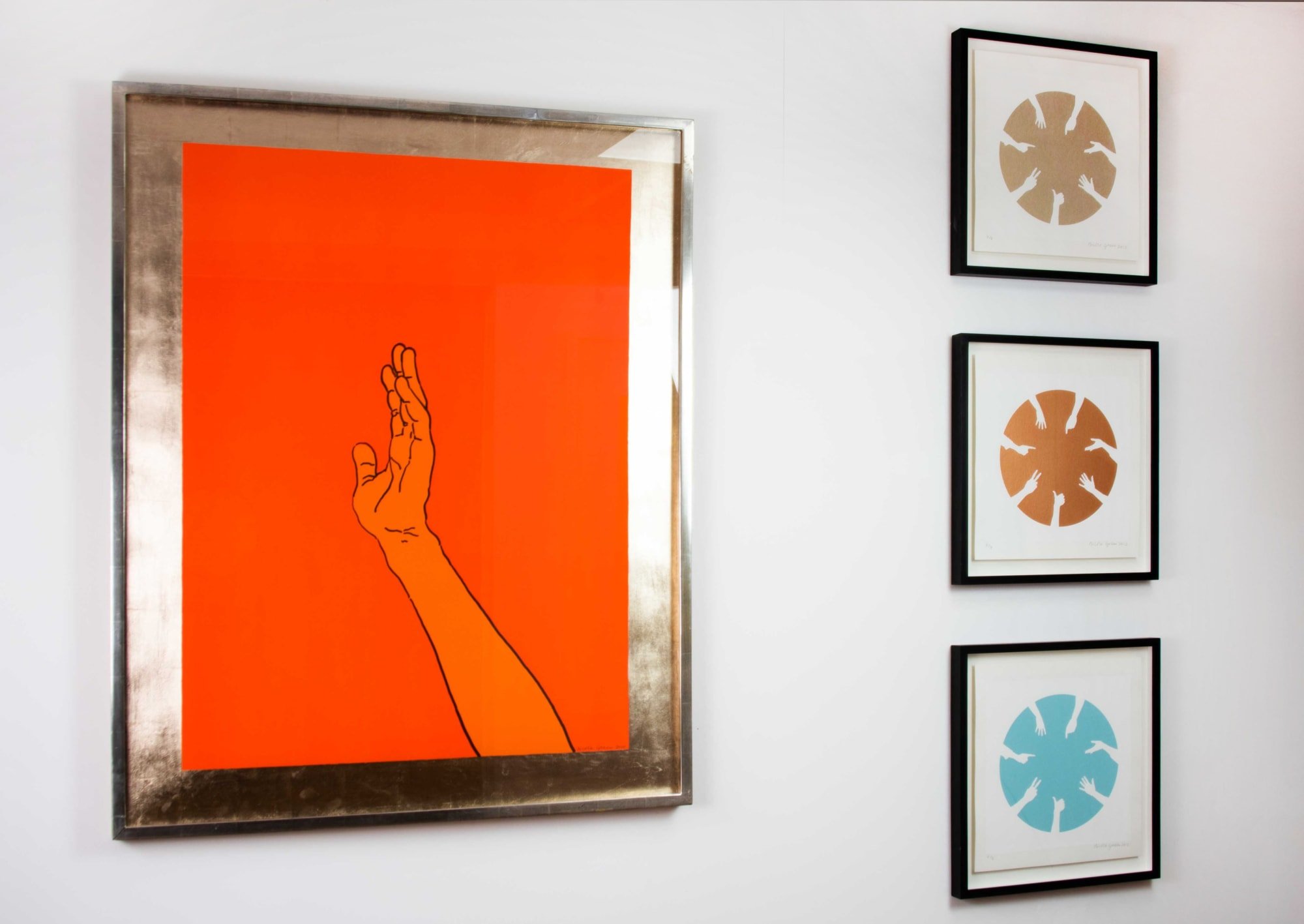 After her numerous trips to the US on Obama’s 2008 Presidential Campaign, Nicola had amassed a huge archive of sketches and photographs, as well as newspapers, magazines and paraphernalia. Nicola spent countless hours researching the complex themes contained in this story. She deliberated for months, working out how to distil this extensive primary material and research.

Nicola understood that she must find new and unique ways to make sense of this story, to uncover its most essential meaning and form, and ensure its themes could continue to be explored and understood for generations to come.

The artist began her process at the London Printworks Trust, an institution uniquely experienced in hand printing textiles. Here she used vast silkscreens on endlessly long tables, printing onto reams of paper. She began by isolating elements from her many sketches and photographs, projecting and printing the sectioned images at speed with the goal of exposing the most powerful and pure symbols from this mass of material.

Through the process of pushing ink through the screens, again and again, it became clear which elements conveyed meaning, and which could be discarded. By using the screens as a drawing tool Nicola pushed the boundaries of her materials; overlaying icons, multiplying them, reducing them: testing the limits of negative space, pattern and repetition. Nicola unsentimentally experimented with their form and colour, exposing the most essential gestures and symbols. 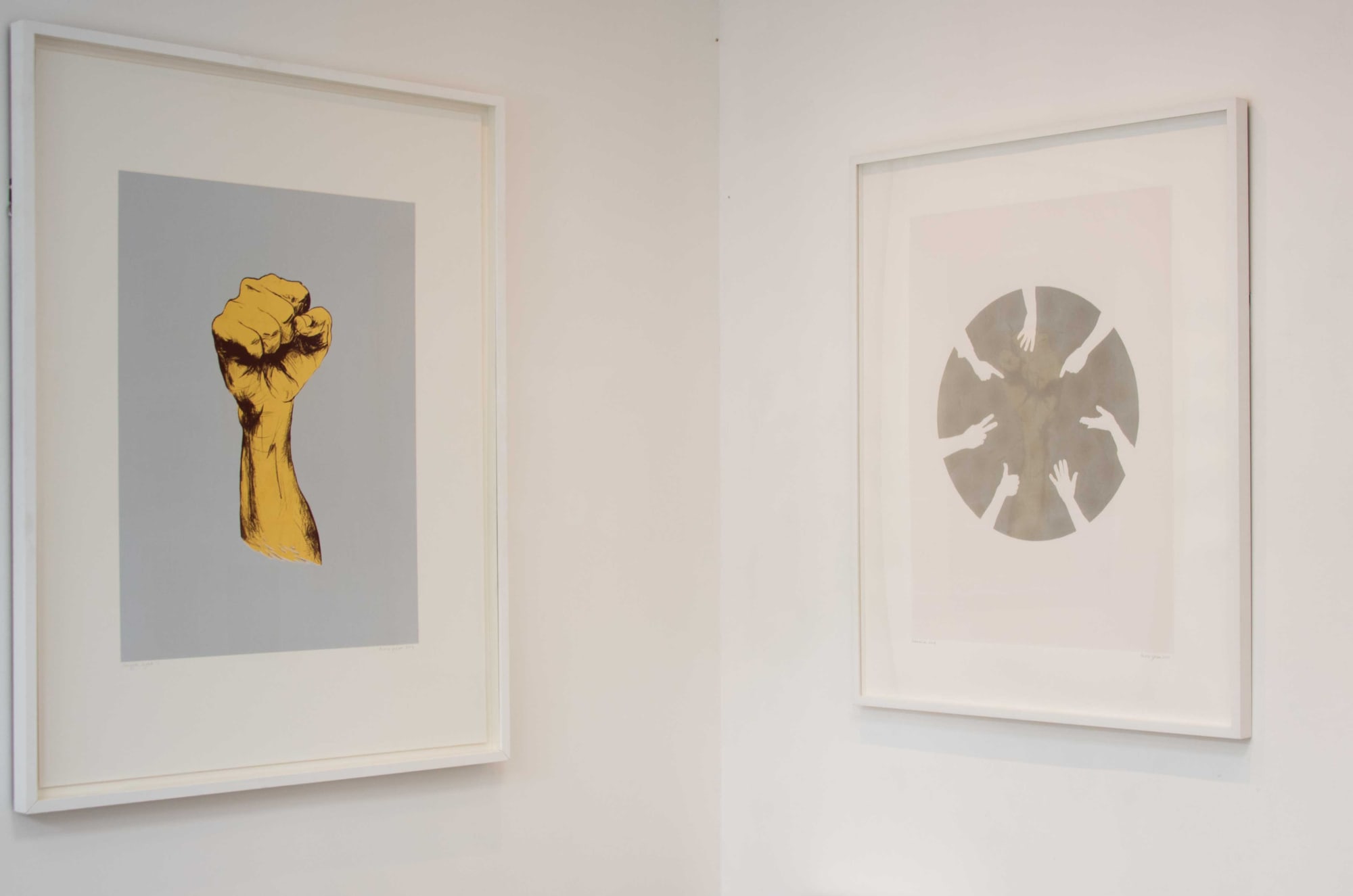 Through these relentless processes, Nicola’s abstractions minimised line whilst still maintaining critical form. Through this practice, meaning was layered into every inch of the apparently simple imagery.

Nicola Green is a critically acclaimed social historian and visual artist. Nicola has established an international reputation for her ambitious projects that can change perceptions about identity and power; exploring themes of race, spirituality, religion, gender, and leadership.

Nicola has gained unprecedented access to iconic figures from the worlds of religion, politics, and culture, including collaborations with Pope Francis, President Obama, the Archbishop of Canterbury and the Dalai Lama. Driven by her belief in the power of the visual image to communicate important human stories, Nicola chooses to assume the role of ‘witness’ to momentous occasions taking place across the globe.

Inspired by her own mixed-heritage children and multi-faith family, she creates and preserves religious, social, and cultural heritage for future generations. Recording these events as they happen, and investing many hours of academic and artistic research, Nicola builds and curates substantial archives.

Nicola Green Unity exhibition is on at the Zuleika Gallery in Woodstock, Oxfordshire until 14 March.