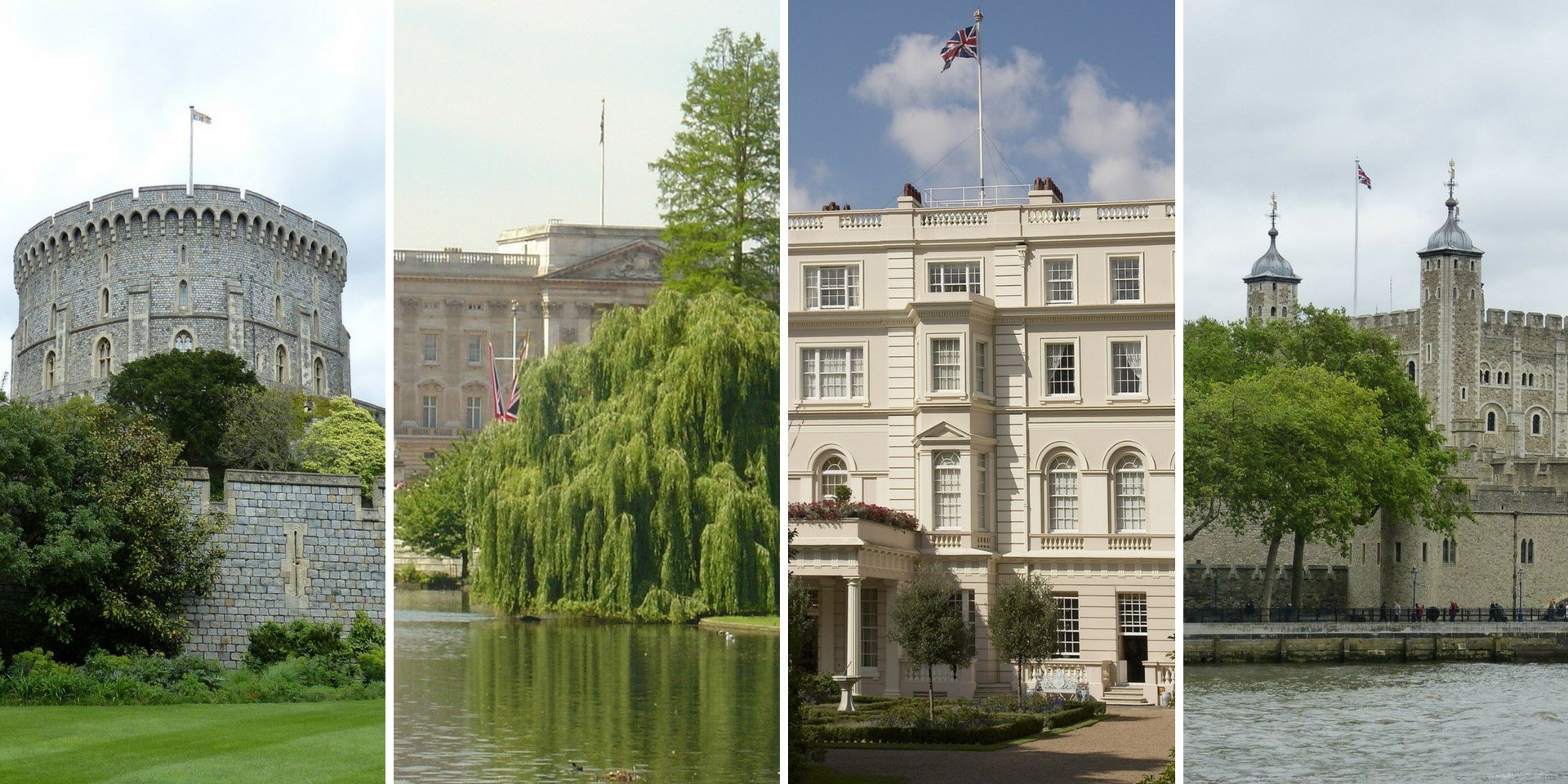 From Buckingham Palace to Windsor Castle, our pick of the best royal residences - palaces, castles and houses - you can visit on a day trip from Oxford.

As far as royal residences go, Windsor is the oldest and largest occupied castle in the world. William the Conqueror chose the site of Windsor Castle high above the river Thames, to guard the western approach to London from any potential attack. Building work started around 1070 and it was completed 16 years later. And since then Windsor Castle has been the home of 39 monarchs.

Different kings and queens have enlarged and restructured the castle by during their reign. It is now an official residence for Her Majesty the Queen, where she spends most of her private weekends, and she takes up official residence for a month over Easter (March to April), known as Easter Court. Windsor Castle is open to the public all year round and is just 43 miles (1 hour) drive from Oxford.

Find out more about visiting Windsor Castle on the Royal Collection Trust website.

A working palace and the official residence of the Queen, Buckingham Palace is one of Britain’s most recognised historic sites and a focal point for national celebrations and events. Originally known as Buckingham House, the building at the core of today's palace was a large townhouse built for the Duke of Buckingham in 1703 until 1761 when George III acquired the whole site as a private family residence for his wife, Queen Charlotte, and their children.

Buckingham Palace, which became the London residence of the British monarch in 1837, is open to the public for 10 weeks during the summer months, and for a limited number of tours in winter and spring. Buckingham Palace is a 56 miles (1 hour 20 minutes) drive from Oxford.

Find out more about visiting Buckingham Palace on the Royal Collection Trust website.

Built between 1825 and 1827 to a design by John Nash for George III, Clarence House is situated on The Mall and shares the St. James's Palace garden. Clarence House was previously home to Queen Elizabeth The Queen Mother for almost five decades, until 2002.

It is the official London residence of The Prince of Wales and The Duchess of Cornwall, and was the official residence for Prince William from 2003, until his marriage in April 2011, and for Prince Harry from 2003 until 2012. Clarence House is open to the public in August every year. Clarence house is in central London - 56 miles (1 hour 20 minutes) drive from Oxford.

Kensington Palace was originally a two-storey Jacobean mansion built by Sir George Coppin in 1605 in the then village of Kensington. It was purchased by William III and Mary II in 1689 and immediately expanded with the addition of a three-story pavilion at each of the four corners. Since then, Kensington Palace has been a home to the royal family.

It is now the official residence of the Duke and Duchess of Cambridge and their children, and formerly The Duke and Duchess of Sussex. Her Majesty the Queen owns Kensington Palace on behalf of the nation, and the Historic Royal Palaces charity cares for the parts that are open to the public like the State Rooms. Kensington Palace is open daily, except 24 to 26 December. It is 56 miles (1 hour 20 minutes) drive from Oxford.

Find out more about visiting Kensington Palace on the Historic Royal Palaces website.

The Tower of London is a historic castle located on the north bank of the River Thames in central London Built in the 1070s, by William the Conqueror to defend and control the city. As a whole, the Tower is a complex of several buildings set within two concentric rings of defensive walls and a moat – with the White Tower, which gives the entire castle its name at the centre.

Apart from being used as a residence by the royal family for over 500 years, the Tower of London has played a prominent role in English history like the murder of Henry VI during the Wars of the Roses, and the of Anne Boleyn second wife of King Henry VIII. Today the Tower of London houses the crown jewels. The Tower of London is open daily except between 24 to 26 December and 01 January. It is 60 miles (2-hour) drive from Oxford.

Find out more about the Tower of the London on the Historic Royal Palaces website.

Set on the edge of the River Thames – 12 miles upstream from Central London, Hampton Court Palace in Surrey was originally a Tudor palace created for Cardinal Thomas Wolsey in the early 16th century. The Cardinal gifted the palace to King Henry VIII, and following a period of massive rebuilding and expansion, it became home to Henry VIII and his six wives.

The family house of the Prince of Wales and Duchess of Cornwall, Highgrove House is near Tetbury in Gloucestershire. Built in the late 18th century, Highgrove (and its estate) was owned by various families until it was purchased in 1980 by the Duchy of Cornwall. Prince Charles remodelled the Georgian house with neo-classical additions in 1987 and frequently hosts various charitable events at the house.

Highgrove house is noted for its extensive gardens, which are open to the public for guided tours on selected dates between April and October each year, and run according to Charles's environmental principles. The tours are an opportunity to discover the history, inspiration and unique organic management behind this incredible series of gardens. Highgrove House is 55 miles (1 hour 20 minutes) drive from Oxford.

Find out more about visiting on the Highgrove House Gardens website.