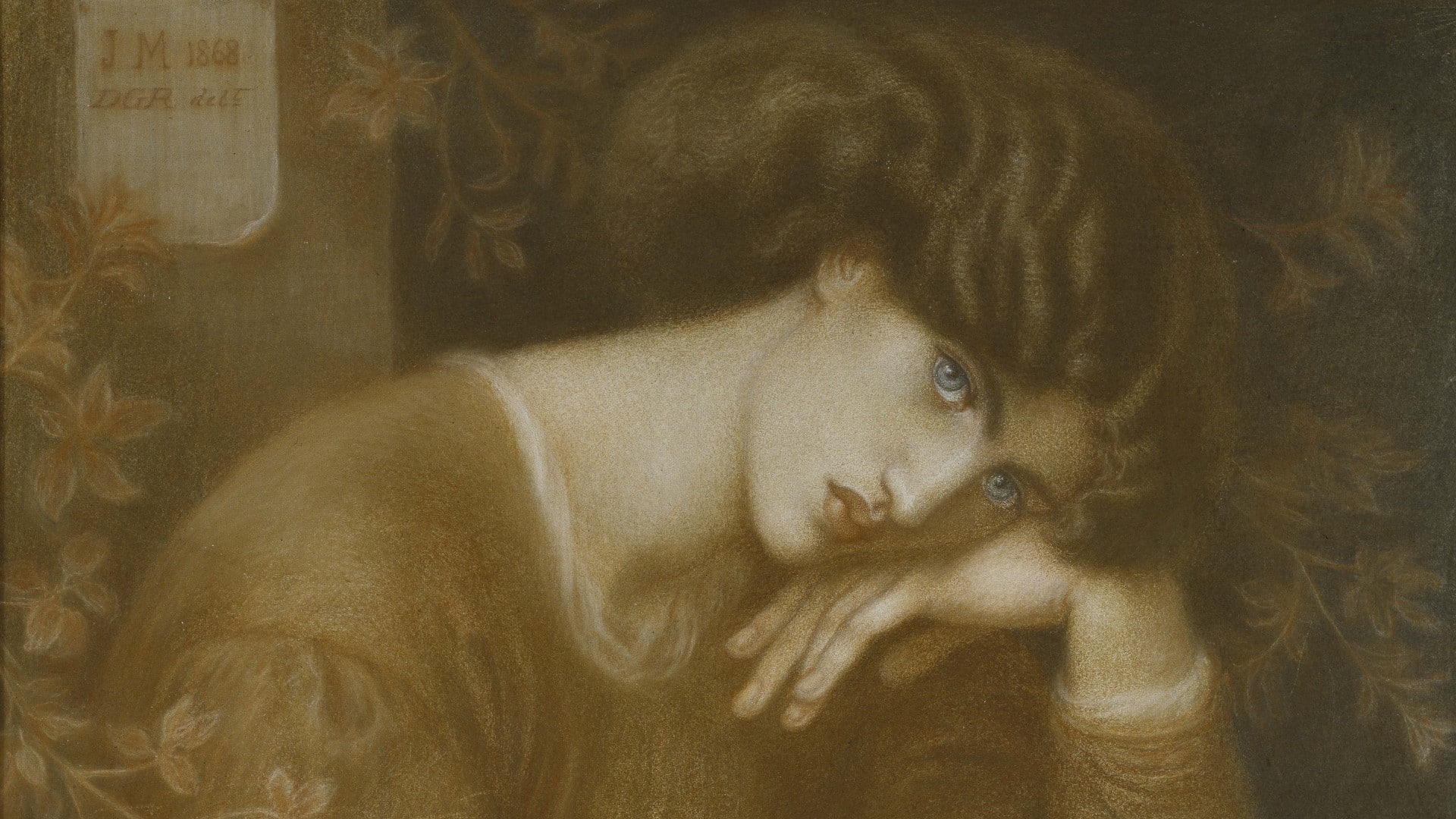 From a sketch on the back of an envelope to grand, elaborate chalk drawings, there is an upcoming exhibition at the Ashmolean that will offer a rare glimpse into their internationally-renowned collection of Pre-Raphaelite works and the artists associated with the movement.

The Pre-Raphaelites - Drawings and Watercolours at the Ashmolean is the first large-scale exhibition of works on paper that will offer a chance to look at the whole range of their output across different subjects, styles and media. It demonstrates their individual skills, collective creativity and revolutionary thinking about art and society, which was to have a lasting impact on British art history.

They proposed a new mode of working, forward-looking despite the movement’s name, which would depart from the ‘mannered’ style of artists who came after Raphael. They sought a return to the abundant detail, intense colours and complex compositions of Quattrocento Italian art. Later followers of the principles of the Brotherhood included Edward Burne-Jones, William Morris and John William Waterhouse.

Oxford has a special place in the history of Pre-Raphaelitism. It was at Exeter College that William Morris, who went into residence in January 1853, met fellow first-year undergraduate Edward Burne-Jones, and the pair became converts to the movement - encouraged by Thomas Combe, who was superintendent of the Clarendon Press, which is part of the Oxford University Press. The two young undergraduates saw Combe's collection and became enthusiastic converts to the movement.

Oxford’s role in the movement has made it a magnet for significant bequests and acquisitions. It is particularly rich in portraits, which throws an intimate light on the friendships and love affairs of the artists, and in landscapes that reflect Ruskin’s advice to 'go to nature'.

The Pre-Raphaelites exhibition at the Ashmolean has been curated by Christiana Payne, Professor Emerita of History of Art at Oxford Brookes. Christiana graduated in modern history from St. Catherine's College, Oxford, and then went on to complete her MA and PhD at the Courtauld Institute of Art, University of London, where her PhD was supervised by Michael Kitson.

"I've always liked the Pre-Raphaelites", says Christiana. "I think they were brave and innovative in reacting against the art and the training methods of their day (especially the art shown in Royal Academy exhibitions and the methods used in the RA Schools), they often took up challenging social and political themes (such as the nature of work or the idea of the 'fallen woman'), they had a strong feeling for the beauty of nature, flowers, trees, landscapes."

The history of the Brotherhood is a complicated one because the three most important founders of the Brotherhood - John Everett Millais, William Holman Hunt, Dante Gabriel Rossetti - were strong characters, each with their own distinctive artistic vision. They were joined by others with equally individual ideas - including John Ruskin and Edward Burne-Jones. They all loved poetry (many of them wrote it, too), and they had a good sense of humour.

The Pre-Raphaelites are possibly best known for their depictions of women. The women celebrated in their paintings were often artists and intellectuals - with unconventional beauty that combined strikingly strong, even androgynous features, with an ethereal quality implying a rich inner life. Jane Burden was one such remarkable woman. Despite being born into a poor Oxford family and having little childhood education, she became hugely accomplished, speaking French and Italian. Jane had been spotted by Dante Gabriel Rossetti and Edward Burne-Jones when they were working on murals for the Oxford Union, and she became a model and muse for the group.

Departing from academic training, Pre-Raphaelite landscape painters worked out of doors; they aimed to capture the effects of sunlight and shadow and to include every detail that they could see. They often chose surprising effects of atmosphere and colour or depicted familiar subjects from unusual viewpoints. Instead of using only transparent washes, they also worked with bodycolour (gouache) which produces intense colours. Some went abroad to find spectacular scenery; others stayed in southern England and found beauty in simple, everyday scenes. Their subjects range from the ancient city of Jerusalem (Thomas Seddon, 1854) to an old barn near Reading (George Price Boyce, 1863).

You'll be able to explore the enormous variety of the work by the artists that made up this movement - the range of techniques and media used and the different subject-matters – as well as the intimate and often complex friendships and love affairs between them. "It's especially strong in works by Rossetti, Burne-Jones and Ruskin", Christiana points out.

"It raises questions about Ruskin's relationship with the movement - he claimed they'd followed his advice in 'going to nature', but his own (very beautiful) drawings and watercolours are totally different from the drawings of Rossetti and Burne-Jones, two artists whose work he admired. They focus on the human figure and on imagination; Ruskin's work is about the non-human natural world and observation", she continues.

"I haven't been able to see the drawings themselves from late March 2020 to the end of February 2021", says Christiana when asked about her experience of curating an exhibition in lockdown. "I saw them again for the first time recently, as we are now installing the exhibition; libraries were closed until after my deadline for the catalogue text. The exhibition will probably be open for a much shorter time than was originally planned", she adds.

Christiana has authored a book to accompany the exhibition. More than just an exhibition catalogue, the book is a showcase of the Ashmolean's incredible collection, and it demonstrates the enormous range of Pre-Raphaelite drawing techniques and media, including pencil, pen and ink, chalk, watercolour, bodycolour and metallic paints.

The book, which was released on 01 March, includes designs for stained glass and furniture as well as preparatory drawings for some of the well-known paintings in the collection. Pre-Raphaelite Drawings and Watercolours is available to order on Amazon or Blackwell's.

While the exhibition is installed, the descriptions provided, the accompanying catalogue and book printed, and the gift shop shelves stocked, regrettably, the opening date for the Pre-Raphaelites exhibition at the Ashmolean is yet to be confirmed. Following the dramatic events of 2020 and significant re-scheduling of exhibition programmes, it will be a privilege to see one of the Ashmolean's superlative permanent collections.

But, in the meantime, as part of a series of Pre-Raphaelite inspired events to accompany the exhibition, artist Kieran Stiles led an online workshop exploring the methods behind the delicate and exquisite drawings of Rossetti.

Later in March, in The Quest for Perfection, Dr Fiona Mann, Research Affiliate Oxford Brookes University, will discuss the complexities faced by Burne-Jones in working with traditional materials such as vellum, silverpoint, and gold to produce high-quality works that were both decorative and unconventional.

And come April, in Elizabeth Siddal and English Literature, Dr Robert Wilkes, Independent Scholar and former Oxford Brookes Research Affiliate, will talk about how the Pre-Raphaelite artist, poet and model Elizabeth Siddal was inspired by historical and modern English literature in her artworks, many of which are now in the Ashmolean’s collection.

UPDATE: The exhibition will run from Tuesday 18 May to Sunday 20 June.

Affiliate disclosure: We may earn a commission if you click through and purchase products listed on this page. The commission we earn helps towards the cost of running this website. Please visit our affiliate marketing disclosure page for more information.