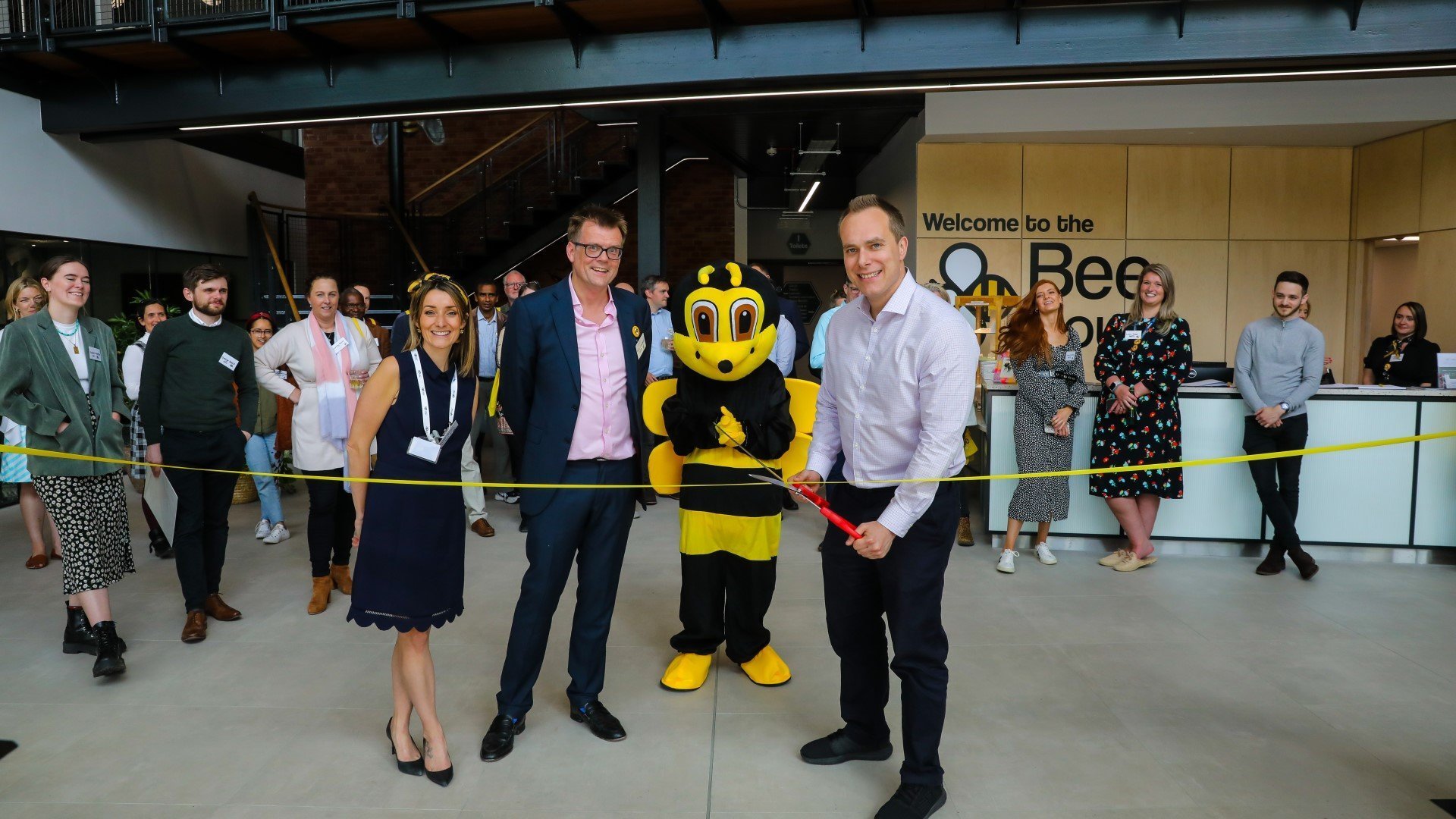 After much anticipation, Milton Park celebrated the official opening of the Bee House – its new flexible workspace – on World Bee Day (20 May 2022). The flexible workspace, created from a £12.4 million refurbishment of 140 Eastern Avenue, was officially opened by David Johnston, MP for Wantage and Didcot.

Nikki Gibson, Head of Flexible Workspaces at Milton Park and Philip Campbell, Commercial Director at MEPC Milton Park, alongside the rest of the MEPC team, were joined by those that had contributed to the vision and creation of the workspace, including project contractors and suppliers, in addition to numerous Milton Park occupiers.

To mark the Bee House’s official opening, guests enjoyed tours around the new space, took selfies with ‘Phoebee’ the mascot and enjoyed live music from a local jazz band alongside snacks and refreshments from the Hive Café.

Visitors also had the chance to stop by the ‘Bee Meadow’ art exhibition on display in the Bee House atrium and Buzz conference room, forming part of the Oxfordshire Artweeks Festival with 10% of all artwork proceeds donated to the Didcot Powerhouse Fund.

David Johnston, MP for Wantage and Didcot, said: “It was great to be at the launch, and I was very impressed by the facilities and quality of the finished building.

“The design and innovation shown throughout the flexible workspace is a real testament to all the hard work put in by those at Milton Park who have made their ambitious vision become a reality. I’m sure occupiers and local residents alike will be excited to use this new building at the centre of this thriving science, technology and business community.”

The Bee House gained its name after it was discovered that the what3words square for the location of the Hive Café is ///feasted.cloud.honeybees where people can ‘feast’ in a brand-new café, work in the cloud and collaborate like honeybees.

The Bee House offers a range of small and medium-sized flexible office spaces to rent, ranging from 97 to 2,574 sq ft (9 to 239m). There are also a 145-seat conference facility, phone booths and meeting rooms available to hire.

Alongside the flexible offices and Buzz conference room facility, the Bee House will also be open to small groups and individuals seeking a workspace with a buzz through the Honeycomb co-working memberships, designed to suit a range of needs and working preferences.

The Hive Café is open to all, whether you work at Milton Park or live locally, serving food, drinks, cakes and snacks throughout the day, meaning anyone can be part of the buzz at the Bee House.

The Bee House’s very own queen bee, Nikki Gibson, Head of Flexible Workspaces at Milton Park, said: “We’re buzzing that the Bee House is now open and that we have a growing number of companies settled here.

“The pandemic has shown us, more than ever, that businesses are after flexibility when choosing where to work. Creating a space that encourages collaboration and cross-pollination between businesses has been the vision for the Bee House from the very beginning.

“The level of interest and enquiries we’ve received over the last few weeks for co-working memberships and flexible office space has been so pleasing to see. We can’t wait to welcome more people to our buzzy home of brilliance over the coming months.”

There are several sustainable ways for people to travel when visiting the Bee House. There are secure bike parking areas, a cycle hire hub, showers, and heated lockers for keen cyclists. Fast-charging electric vehicle (EV) points are also easily accessible to those who need to plug in.

Additionally, like others based at Milton Park, for just £20 per year, people working at the Bee House can benefit from unlimited bus travel within Didcot.