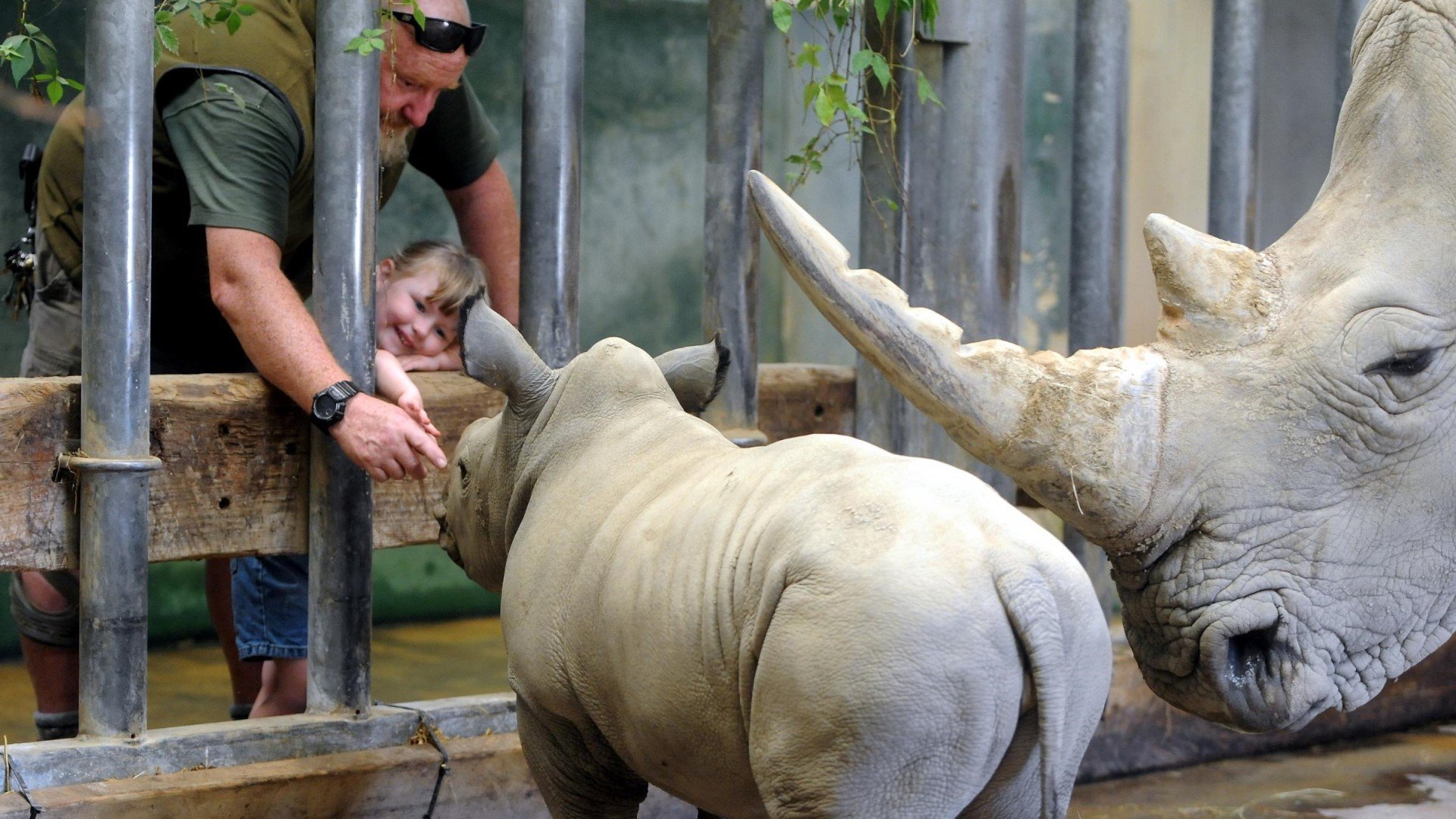 Cotswold Wildlife Park & Gardens has celebrated the newest addition to its Rhino family. Molly is the eighth Rhino calf to be born at the Burford collection and is Monty and Ruby’s fourth breeding success together.

Births in captivity are considered rare, with only nineteen White Rhinos born in European zoos in the last twelve months. Her birth is a testament to the dedication of the mammal keepers and the park’s commitment to the European Breeding Programme (EEP).

White Rhinos (Ceratotherium simum ssp. simum) have always been an important species at the park, and considerable thought is given to naming these iconic animals.

Previous calves have been named after the founder of Cotswold Wildlife Park & Gardens, Mr John Heyworth, and the highly respected South African conservationist, Ian Player, who spearheaded efforts to rescue the Southern White Rhino from extinction.

This time the honour was given to Head Keeper Mark Godwin (pictured above with his daughter Molly meeting her namesake).

Mark has worked at the park for 31 years and has looked after the ever-growing ‘crash’ of Rhinos for the last 13 years. This is the first Rhino calf he has named. He decided to call her Molly after his four-year-old daughter. Molly described having a Rhino named after her as “amazing!”.

Mark’s family live on-site at Cotswold Wildlife Park, and Molly, along with her five-year-old brother Henry, have grown up at the wildlife park, and the siblings regularly visit their favourites – the Rhinos.

During the lockdown, when the park was temporarily closed to the public, they even lent their dad a helping hand by mucking out the Rhinos and Camels.

Spending their childhood at the park has sparked a passion for wildlife, and both would like to follow in their father’s footsteps and work with animals when they’re older.

In October 2021, Reggie Heyworth, the Park’s Managing Director and a Tusk Trust Ambassador, ran the London Marathon in aid of Tusk Trust raised over £12,000 for the charity.

Reggie Heyworth explains: “Conservation programmes throughout Africa’s wildlife areas and national parks often depend on income from tourism and support from charities such as Tusk Trust.

“With so few tourists visiting Africa, it is all the more important for us to support the work of Tusk Trust, who fund over forty programmes throughout sub-Saharan Africa, including vital work to protect rhinos and elephants from poachers”.

Cotswold Wildlife Park opens its doors at 10.00am every day during the summer months (April to 31 October), with the last admission at 4.00pm (3.00pm for the rest of the year). Visitors can see the new calf in the solar-powered Rhino House or the large Rhino paddock overlooking the Manor House.