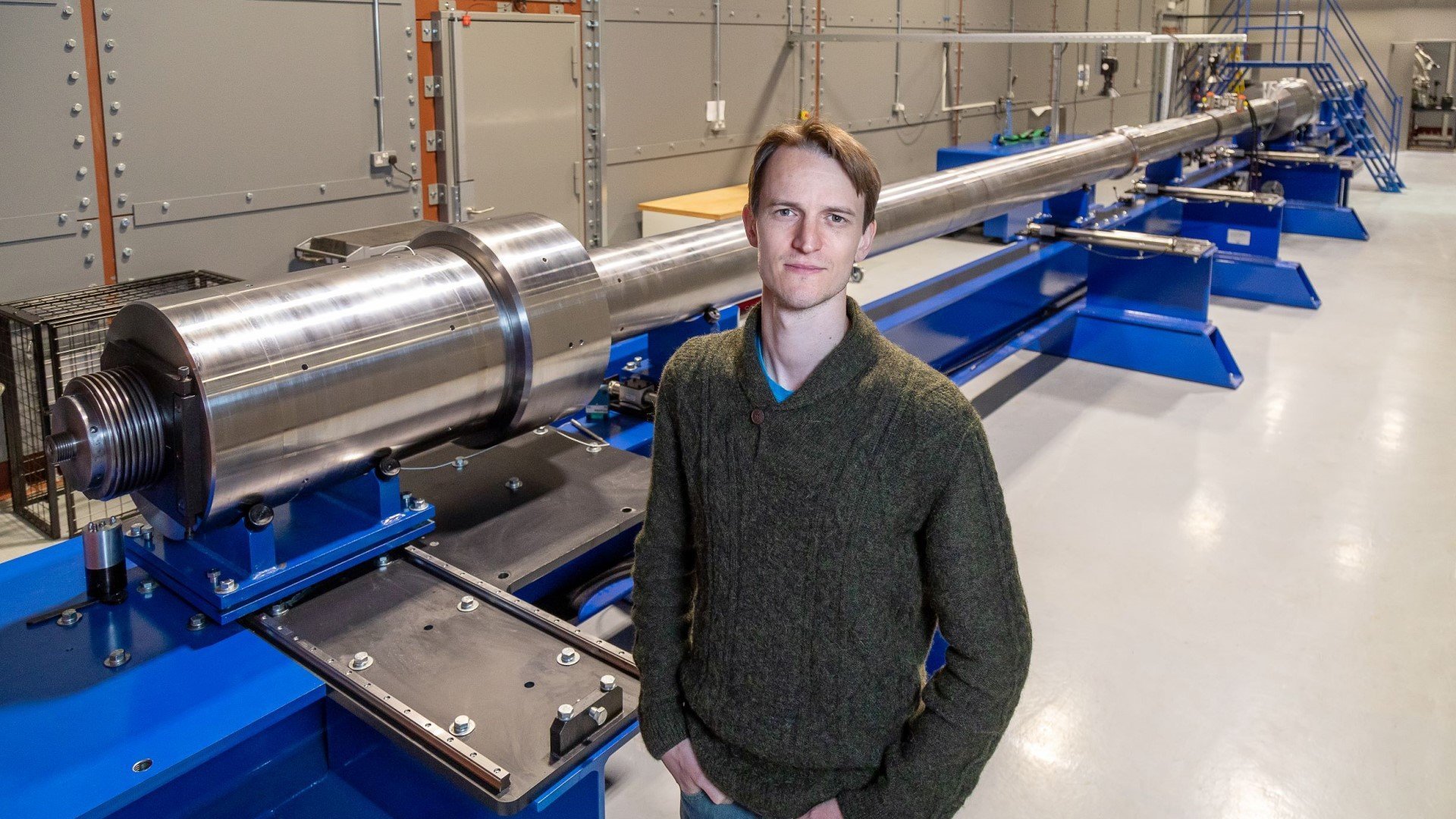 First Light Fusion, a global leader in researching energy generation via inertial fusion, has completed the construction of a 22-metre-long two-stage gas gun as part of its experimental efforts to develop a simpler, faster, and cheaper route to commercial fusion energy.

Weighing 25,000 kg, the new 38 mm gun is the largest of its kind in the UK, and it fires a 100 g projectile, which can reach a maximum velocity of 6.5 km/s or 14,500 mph – 20 times the speed of sound – using up to 3 kg of gun powder. First Light has successfully fired first test shots, with fusion experimental shots on the new device starting in June.

A two-stage light gas gun works by converting the energy released from an ignited propellant into the compression of a light gas, usually hydrogen. This produces gas pressures approximately 10,000 times atmospheric pressure which then launches the projectile. When fired, the gun will launch a projectile into a vacuum chamber at huge speed, impacting a fusion target – the centrepiece of First Light’s unique technology. That impact aims to create the conditions required for fusion.

These ‘hyper velocity’ devices are typically used by astrophysicists to simulate meteorite impacts. A similar gun was used to test the panels on the International Space Station to ensure it could withstand impact from small objects travelling at massive speed. The gun will be used in parallel with First Light’s ‘Machine 3’ and allow engineers to explore a different parameter space by launching larger but slower projectiles. The new gun will be housed in a specifically constructed 10mm steel-clad facility within First Light’s headquarters in Oxford, monikered “The Citadel”.

Dr Nick Hawker, CEO of First Light Fusion, said: “This new gun is an important piece of kit for First Light Fusion and will help us accelerate our development timeline. It will complement the work we are doing with our unique electromagnetic launch pulsed power machine, Machine 3.

“Our fusion technology is driven by the impact of a projectile travelling at significant speed into a fusion target. These targets trade pressure and size, amplifying the pressure from initial impact to the final collapse of the fuel capsule, which is a small part of the whole target. This new gun will deliver lower pressure than Machine 3, so we will have to rely on designs that amplify more. The larger size means we can do this and still get good performance.

“With both facilities together, we can make more than twice as much progress on the most important aspect of our technology, which is the target. Thank you to everyone for their efforts in bring this project together so quickly. It has been a fantastic team effort once again.”

The investment follows a recent $25 million fundraising backed by global institutions, including IP Group PLC & OSI. First Light is growing fast and now has more than 50 employees based in Oxford. The two-stage gas gun project took only 10 months from concept design to delivering a fully operational test facility, which shows the great focus and effectiveness of First Light’s team.