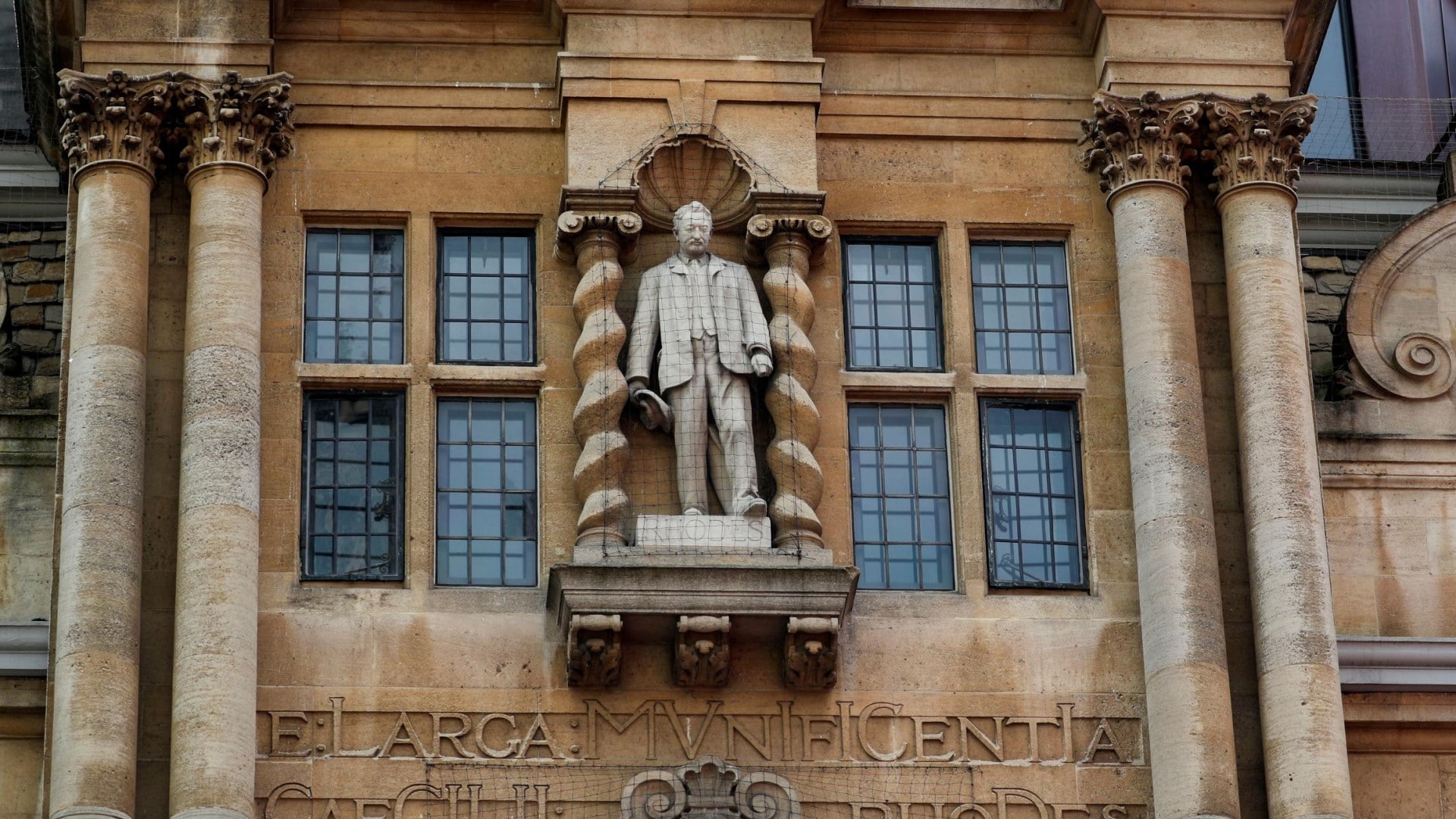 The Cecil Rhodes Statue at Oriel College, University of Oxford, will not be removed for now.

The Independent Commission established by the Governing Body of Oriel College to consider the issues raised by the memorials and legacy of Cecil Rhodes has delivered its report. The Governing Body has made a set of decisions and voted to accept a number of the report’s recommendations immediately.

The Commission backed the College’s original wish (made in June 2020 and reaffirmed again by the College yesterday) to remove the statue whilst acknowledging the complex challenges and costs presented by its removal in terms of heritage and planning consent.

The Governing Body has carefully considered the regulatory and financial challenges, including the expected time frame for removal, which could run into years with no certainty of outcome, together with the total cost of removal.

In light of the considerable obstacles to removal, Oriel’s Governing Body has decided not to begin the legal process for relocation of the memorials. Instead, it is determined to focus its time and resources on delivering the report’s recommendations around the contextualisation of the College’s relationship with Rhodes, as well as improving educational equality, diversity and inclusion amongst its student cohort and academic community.

Work on delivering those measures is expected to begin immediately.

The Governing Body has agreed to:

Funds equivalent to that remaining in the Rhodes legacy will be used to help resource these initiatives.

The independent Commission, chaired by Carole Souter CBE, and supported by commissioners with a broad range of expertise, undertook a ten-month long, detailed and rigorous, academic inquiry into the Rhodes legacy, together with a review of how the College’s 21st Century commitment to diversity can sit more easily with its past.

Members of Oriel College’s Governing Body were delivered the report, in confidence, earlier this month and have had the opportunity to consider the report of the Independent Commission and its recommendations in full.

As well as considering, carefully analysing, and debating evidence from a wide range of experts and stakeholders, the Commission also received and reviewed well over a thousand written contributions from students, alumni, associates of the College and the general public.

Alongside these key findings, the Commission’s report also acknowledged the considerable planning and heritage considerations involved in the removal of the statue, which is situated on the College’s Grade II* listed High Street building. Removal of the statue would be subject to legal and planning processes involving the City Council, Historic England and the Secretary of State for Housing, Communities and Local Government.

The Commission noted that any application for planning permission to remove the memorials is not only likely to face considerable costs, but also complex challenges in the planning process, particularly since the Government’s policy, in relation to historic statues and sites which have become contested, is to ‘retain and explain’ them.

However, the Governing Body recognised the need for a lasting and visible contextualisation of the Rhodes’ legacy, memorials and historical association with the College. It has therefore voted to take forward a number of further recommendations.

The Governing Body has agreed to:

Lord Mendoza, Provost of Oriel College, said: “My sincere thanks go to the Chair, Carole Souter and the expert Commission members for delivering an extensive, rigorous and considered academic body of work. It has enabled the College to achieve a productive resolution to a complex series of issues, and most importantly, we can now set out deliverable measures that can demonstrably improve the educational equality, diversity and inclusion of the College and its community.

“It has been a careful, finely balanced debate, and we are fully aware of the impact our decision is likely to have in the UK and further afield. We understand this nuanced conclusion will be disappointing to some, but we are now focused on the delivery of practical actions aimed at improving outreach and the day-to-day experience of BME students. We are looking forward to working with Oxford City Council on a range of options for contextualisation.”

Oriel College has already undertaken a number of initiatives aimed at improving equality and diversity, including a one-off College scholarship for a postgraduate student from Africa and a yearly donation to the Target Oxbridge programme, which aims to increase the chances of students of Black African and Caribbean heritage and students of mixed race getting into the Universities of Oxford or Cambridge.

Oriel’s admissions for UK-domiciled BME undergraduates are slightly above the University average (21.5% compared with 21.4% in the three years between 2018 and 2020), and that for students with black African and Caribbean heritage, it is also slightly higher during the same period (3.9% compared with 3.2%).

Carole Souter CBE, Chair of the Independent Commission and current Master of St Cross College and former chief executive of The National Lottery Heritage Fund, said: “I would like to express my personal gratitude to each of the commissioners for giving freely of their time and expertise to undertake this important and painstaking work. Each of them has made a significant contribution to the conclusions of the Commission, contributing their knowledge and expertise into how the Rhodes legacy can best inform the future of Oriel College.

“I would also pay tribute to Commission member Peter Ainsworth and his thoughtful and conscientious contribution to the work of the Commission. He was a passionate advocate for heritage and the environment and will be greatly missed.”

Responding to the College’s decisions, Councillor Susan Brown, Oxford City Council Leader, said: “I am personally deeply disappointed that Oriel College have chosen today to backtrack on their previous decision to remove the Rhodes statue and ignore the views of the Commission on this crucial part of their work. For people in our city, this was the most important action that Oriel College could have taken to show an acknowledgement of the discrimination of the past, and they have failed to act.

“Whilst it is good news that they are accepting the other recommendations of the Commission to address the legacy of colonialism, I fear that these measures will not be enough to inspire confidence without this important symbolic step. The legacy of thinkers like Rhodes still extends long tentacles into our society, and it is well past time for all institutions to tackle the difficult issues of colonialism and discrimination.”

An Oxford City Council spokesperson added, “We note the College’s decision not to remove the statue, but we are ready to progress any planning issues should they revise this decision. While government’s new policies on historic monuments gives the Secretary of State for Communities a final say in any planning approval to remove historic statues and favours ‘retain and explain, it also says each case will be considered on its merits, and exceptions can be made.”

Simukai Chigudu, an associate professor of African politics at the University of Oxford, described the decision from the governing body as chilling. “The statement from Oriel College is shocking and, quite frankly, embarrassing. It exposes the insincerity of the College’s stated commitment to change, which was made last summer during the anti-racism protests.

“Most chilling however is the waffle and obfuscation in the College’s statement. The statement claims that the process of removing the statue would be too expensive and would yield no certain outcome. What does that mean? As an alternative to taking down the statue, Oriel says they will increase provisions for BAME students. But framing this as a binary choice is both false and insulting.”