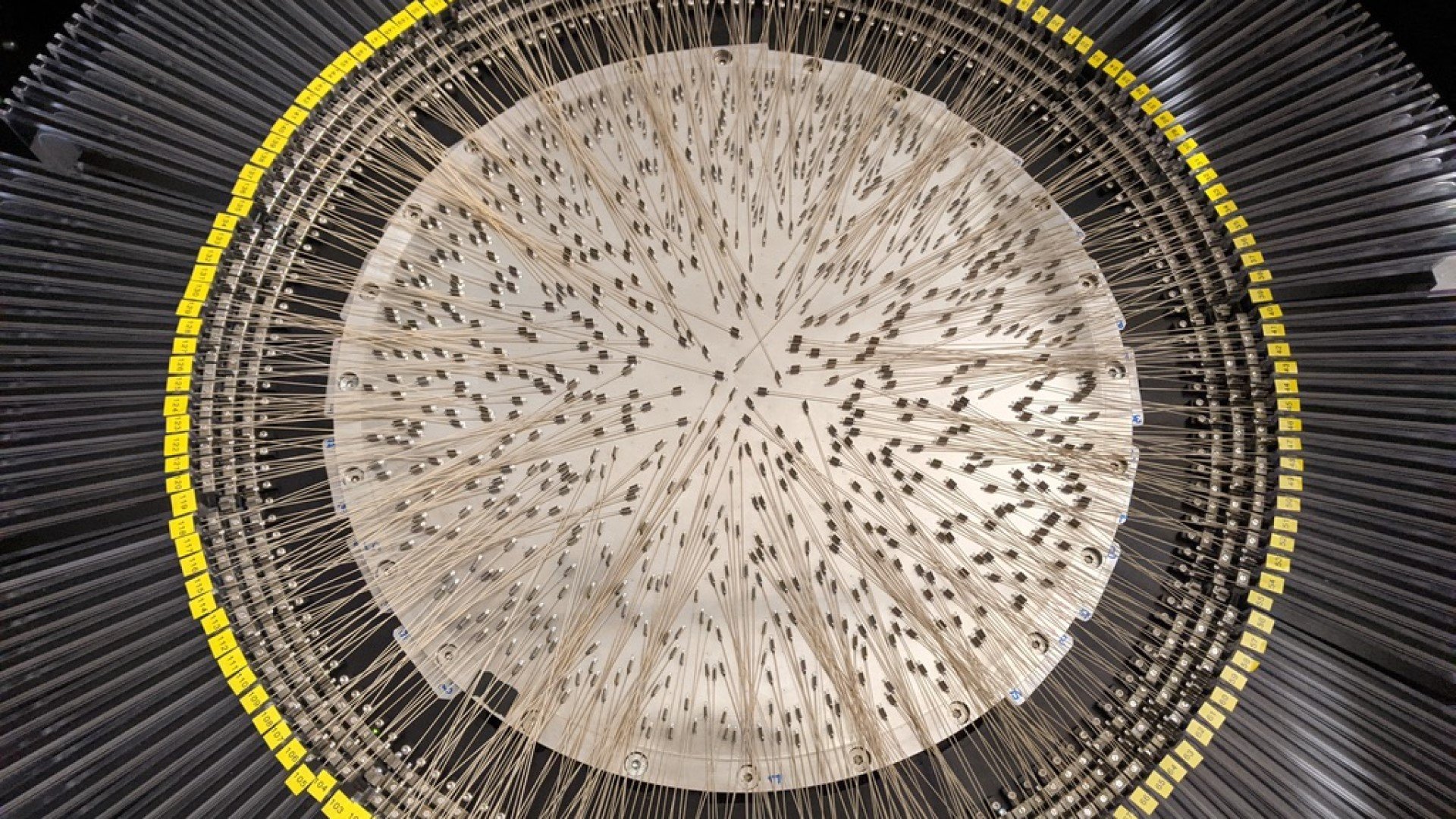 A fully-configured WEAVE field, with 700 of around 950 fibres placed by two robots (out of frame), on location in the WHT. ​Image credit: Gavin Dalton/U. Oxford and STFC’s RAL Space.

A major telescope upgrade, which will allow a comprehensive census of the Universe to answer fundamental astrophysical questions, is now close to completion.

In a significant milestone for the project, all the main components of a new instrument for the William Herschel Telescope (WHT) are now being tested and integrated.

The WHT Enhanced Area Velocity Explorer (WEAVE) is a unique upgrade to the WHT, which will extend the telescope’s field of view to two degrees on the sky to increase the rate of measurements to up to 1000 stars per hour.

The WHT is part of the Isaac Newton Group of telescopes in La Palma, the Canaries. The Science and Technology Facilities Council (STFC) is a partner with Spain and the Netherlands in the operation of the WHT.

Understanding our galaxy and dark energy

The components for WEAVE have arrived in the Canary Islands. The system is now being tested and integrated into the telescope, ready to begin the on-sky commissioning phase before the instrument begins a 1200-night survey over the next five years.

The more than 12 million spectra collected by WEAVE will provide critical data to enhance the science return from Gaia (the European Space Agency’s Milky Way mapper).

In particular, WEAVE will enable the mapping of the dark matter distribution in the Milky Way. It will also allow studies of the formation and evolution of galaxies across cosmic time and the interactions between the stellar content of galaxies and their central black holes.

“WEAVE will provide tens of millions of spectra of stars and galaxies over the coming five years, and the WEAVE Survey will provide data that will help answer questions like how did our galaxy form and the stars within it evolve, how were other galaxies assembled, and what are dark matter and dark energy?”

WEAVE in the UK

The UK has led the European consortium to design and produce this major new instrument, with around 20 million Euros provided by STFC.

Professor Gavin Dalton, WEAVE Principal Investigator, University of Oxford and STFC RAL Space, said: “It is tremendous to see the sustained efforts of so many groups of people finally coming together at the telescope and to finally be able to bring the system to operation.

“WEAVE has been 10 years in development with lots of complex moving parts and components scattered in laboratories across Europe. With everything now at the telescope and operating correctly, we are on the cusp of offering astronomers a new and improved eye on the stars.”

The technology behind the observations

Following a year of painstaking installation of close to 100km of optical fibre assemblies, WEAVE’s fibre positioner has made the journey from the UK and has now been tested and calibrated.

The positioner can place full configurations of over 900 fibres in under one hour using its two high-speed industrial robots. Each fibre collects light from an individual star or galaxy, which is fed to the spectrograph.

The WEAVE spectrograph has already been installed at the WHT. It has two arms, each with its own custom-built cryostat – a liquid-nitrogen refrigeration unit, which will cool the detectors to help limit background ‘noise’ to produce much clearer spectra.

Tests of the spectrograph have already produced high-quality images at all wavelengths from the ultra-violet to the far red. Each fibre can collect light from a single star or galaxy.

On-sky commissioning to surveying the sky

The on-sky commissioning of WEAVE will begin after the integration of the instrument. This will be followed by science verification observations.

WEAVE will be operated by the Isaac Newton Group of Telescopes, which will then commence routine survey and open-time observing.

Video: The positioner is able to place full configurations of over 900 fibres in under one hour using its two high-speed industrial robots. Credit: Gavin Dalton/U. Oxford and STFC’s RAL Space.​