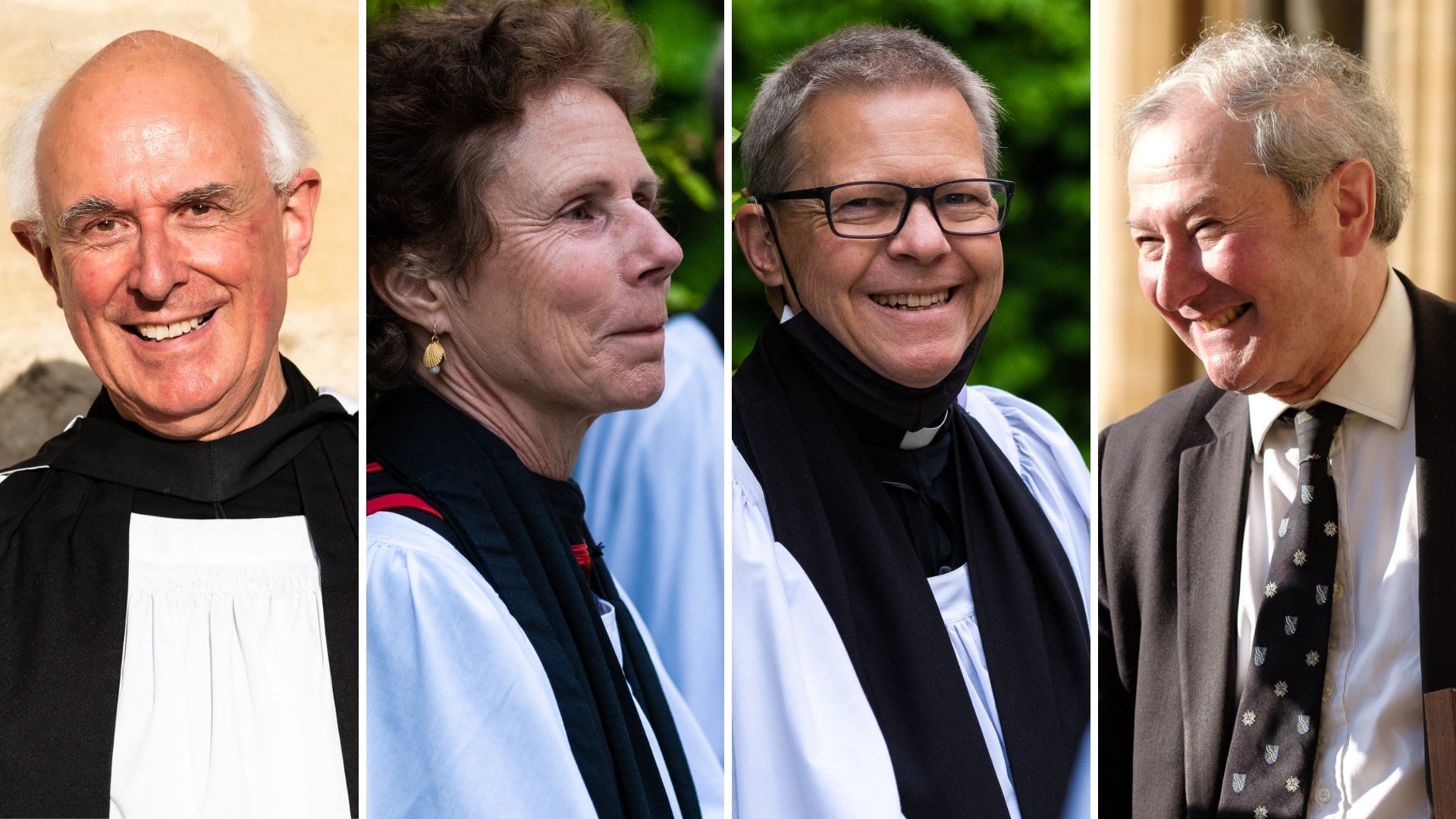 Honours for services to the Church at Oxford’s Christ Church Cathedral. Left to right: The Revd John Tattersall, The Revd Dr Sally Welch, The Revd Charles Chadwick, and James Macnamara.

Eight new Honorary Canons, three from across Oxfordshire, have been installed at Oxford’s Christ Church Cathedral on 22 June. In the same ceremony, three people were admitted to the Order of St Frideswide, one of whom is from Oxfordshire.

Honourary Canons are selected because of their work within the Diocese of Oxford and the wider Church. Similarly, the Order of St Frideswide is a recognition of those who have given outstanding service to the Church.

The order is named after the patron saint of Oxford and was founded in 2001 by the then Bishop of Oxford, the Rt Revd Richard Harries. Just two or three people are admitted each year.

The Rt Revd Dr Steven Croft, the Bishop of Oxford, said: “We are hugely blessed in this diocese to have so many people, lay and ordained, who do so much in their churches, their communities, and beyond.

“I am delighted that this service allows us to say thank you to some of those people for the outstanding work they have done and are doing to make a difference, especially over the last year which has, for so many, been a difficult time.” 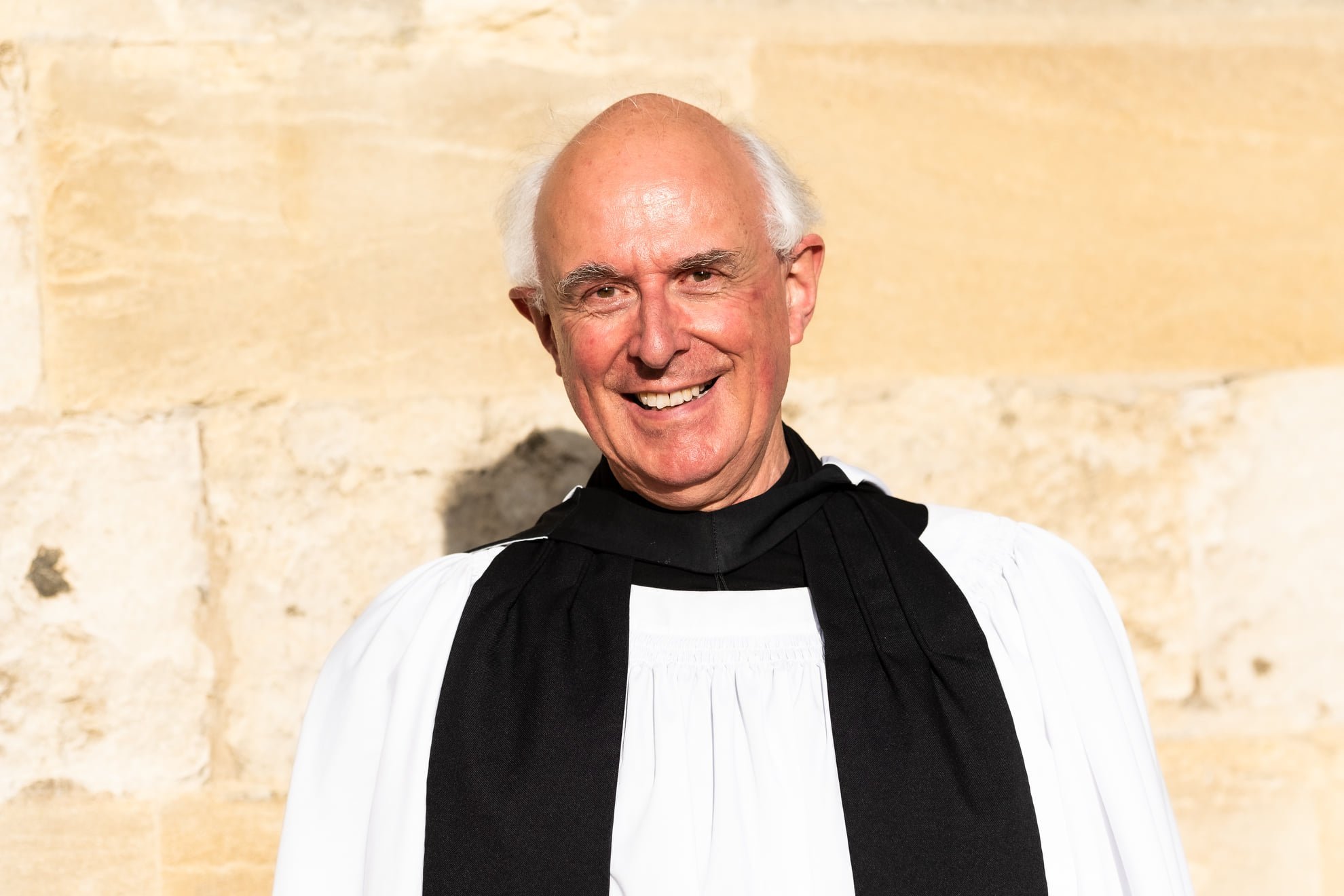 Honours for services to the Church: The Revd John Tattersall. Photo by Steven Buckley.

John had a successful career in London as a chartered accountant, rising to be a senior partner at PwC before receiving a call to ordination. He was ordained as a deacon in 2007 at the age of 55 and as a priest the following year.

Since then, he has served as a self-supporting minister in the Wykeham Benefice in North Oxfordshire and was vocations adviser in the Deddington Deanery before becoming Chair of the Oxford Diocesan Board of Finance in 2013. He also has Permission to Officiate in the Diocese of London.

He was for many years, treasurer and latterly Chair of Council of St Augustine’s College of Theology (formerly the South East Institute for Theological Education) where he originally trained for ordination.

He has been chair of the Court of Trustees of the Royal Foundation of St Katharine, based in the East End of London, since 2012 and is a trustee of the Community of St Anselm at Lambeth Palace.

“I was delighted to be nominated as an honorary canon of Christ Church, the cathedral in which I was first ordained as a deacon in 2007. While my ministry as deacon and priest and my service to the diocese more generally were primarily in response to God’s calling and have always been immensely fulfilling in themselves, it is very comforting to know that they have been appreciated.” 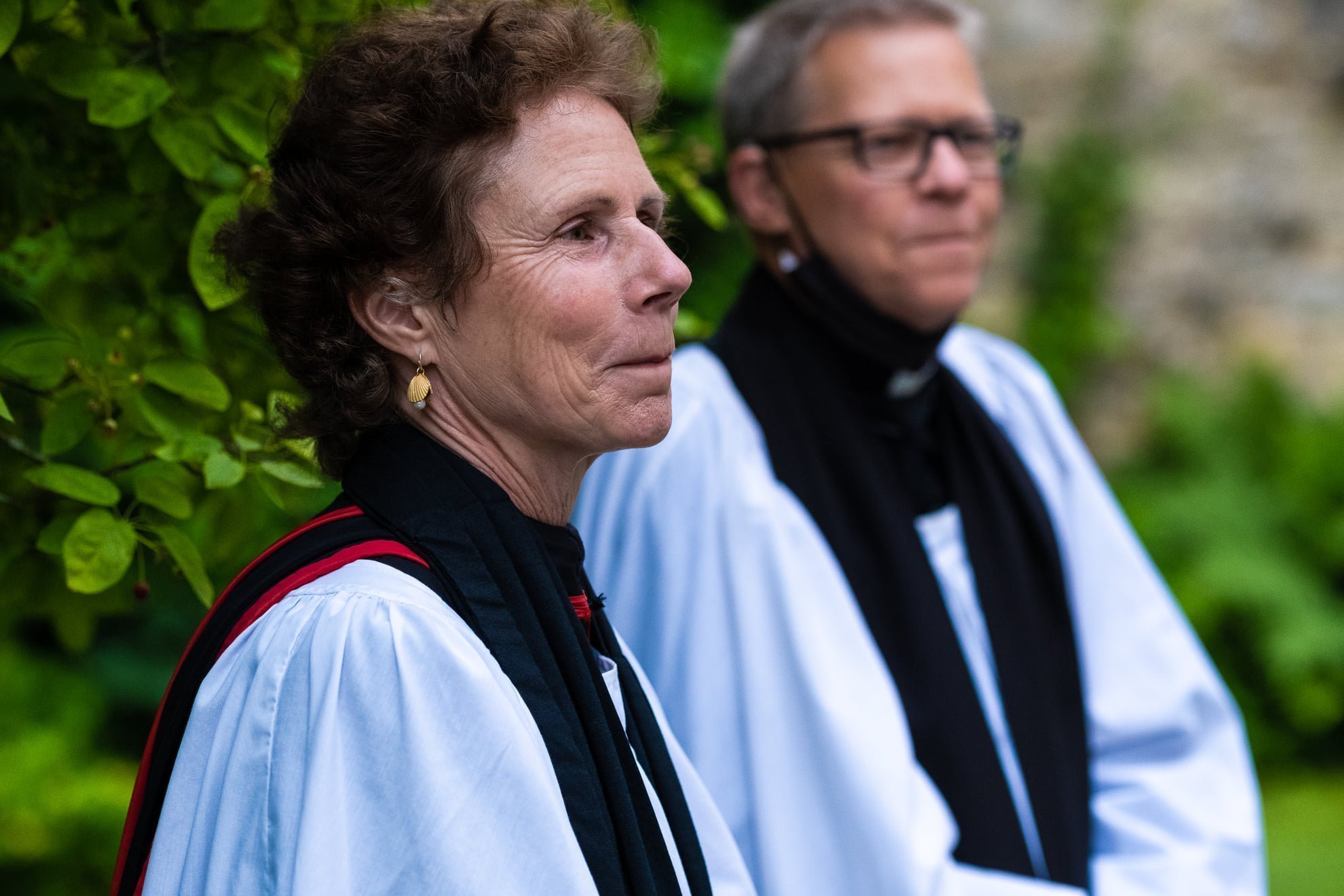 Honours for services to the Church: The Revd Dr Sally Welch. Photo by Steven Buckley.

Sally has been a parish priest in the Diocese of Oxford for over 20 years, serving in both city and rural parishes in a variety of posts, including that of area dean of Chipping Norton.

She is currently the vicar of Charlbury with Shorthampton and diocesan spirituality adviser. She is the author of several books on aspects of ‘outdoor spirituality’, such as outdoor church, pilgrimage and labyrinths.

As well as working with the Christ Church Cathedral Centre for Christian Pilgrimage she also helps schools and churches explore how pilgrimage spirituality can be used in their particular settings.

“I feel very privileged to be ministering in the Diocese of Oxford and am grateful for the opportunities I have of serving both the local and the wider church.” 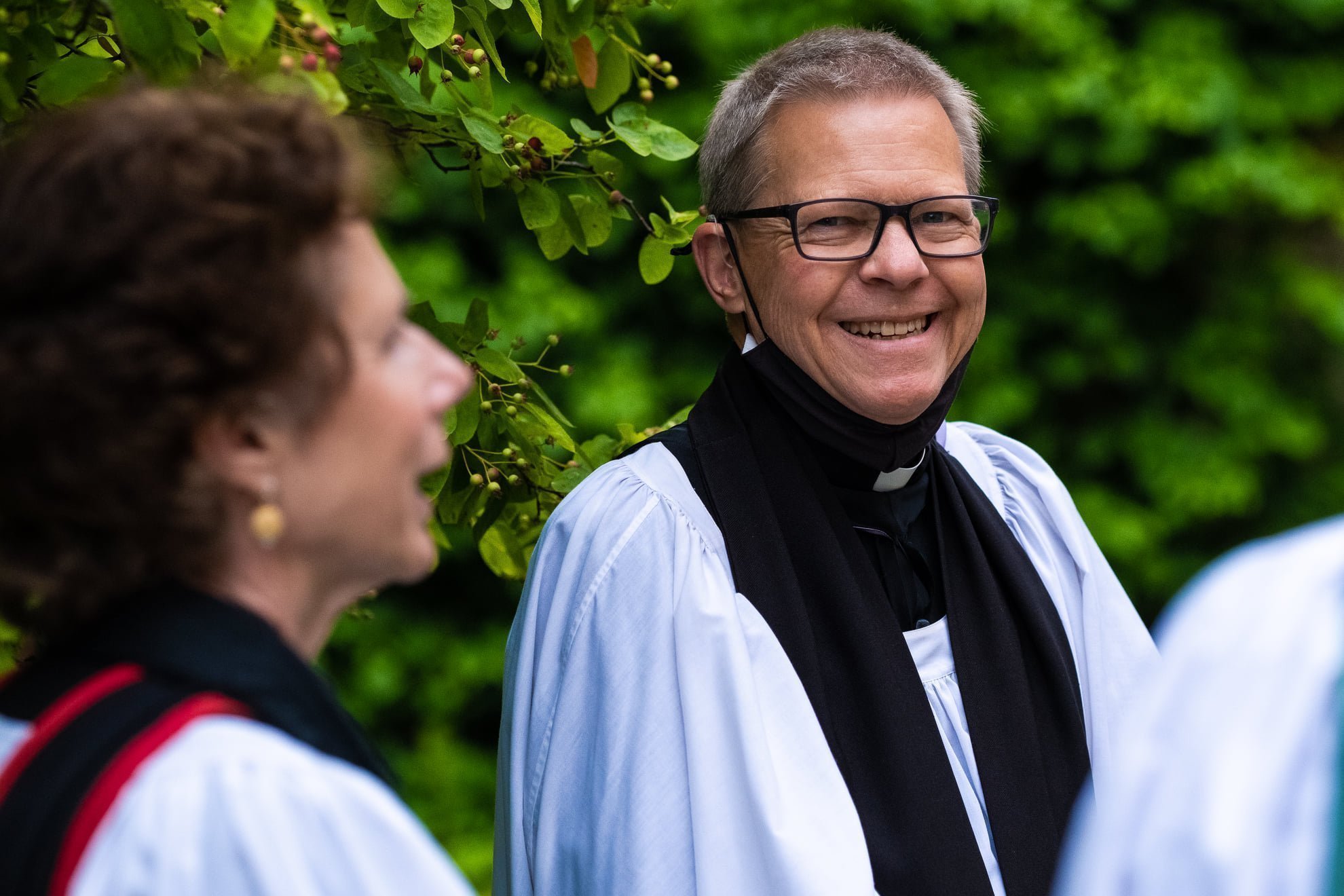 Honours for services to the Church: The Revd Charles Chadwick. Photo by Steven Buckley.

Charles was brought up in South Oxfordshire. Ordained in 1988, he served in a wide range of parishes in both Buckinghamshire and Somerset. Since 2014, he has been a member of the Mission and Ministry department as the Parish Development Adviser for the Dorchester archdeaconry.

He describes his role as “to facilitate creative thinking”. He is also a member of the Continuing Ministerial Development team and with his colleagues is involved in devising and delivering a wide range of ministerial courses and resources.

He is the departmental lead for the rural church and has been involved over the years in a number of working groups and projects to support the enhancement and development of the rural church’s mission and ministry.

When he is not working, he spends his time reading about history and politics, developing his cooking skills, and listening to soul and R and B music. Not for nothing is his dog called Otis!

“I was very surprised and delighted to be invited by Bishop Steven to become an honorary canon of Christ Church. It is a great honour and privilege”. 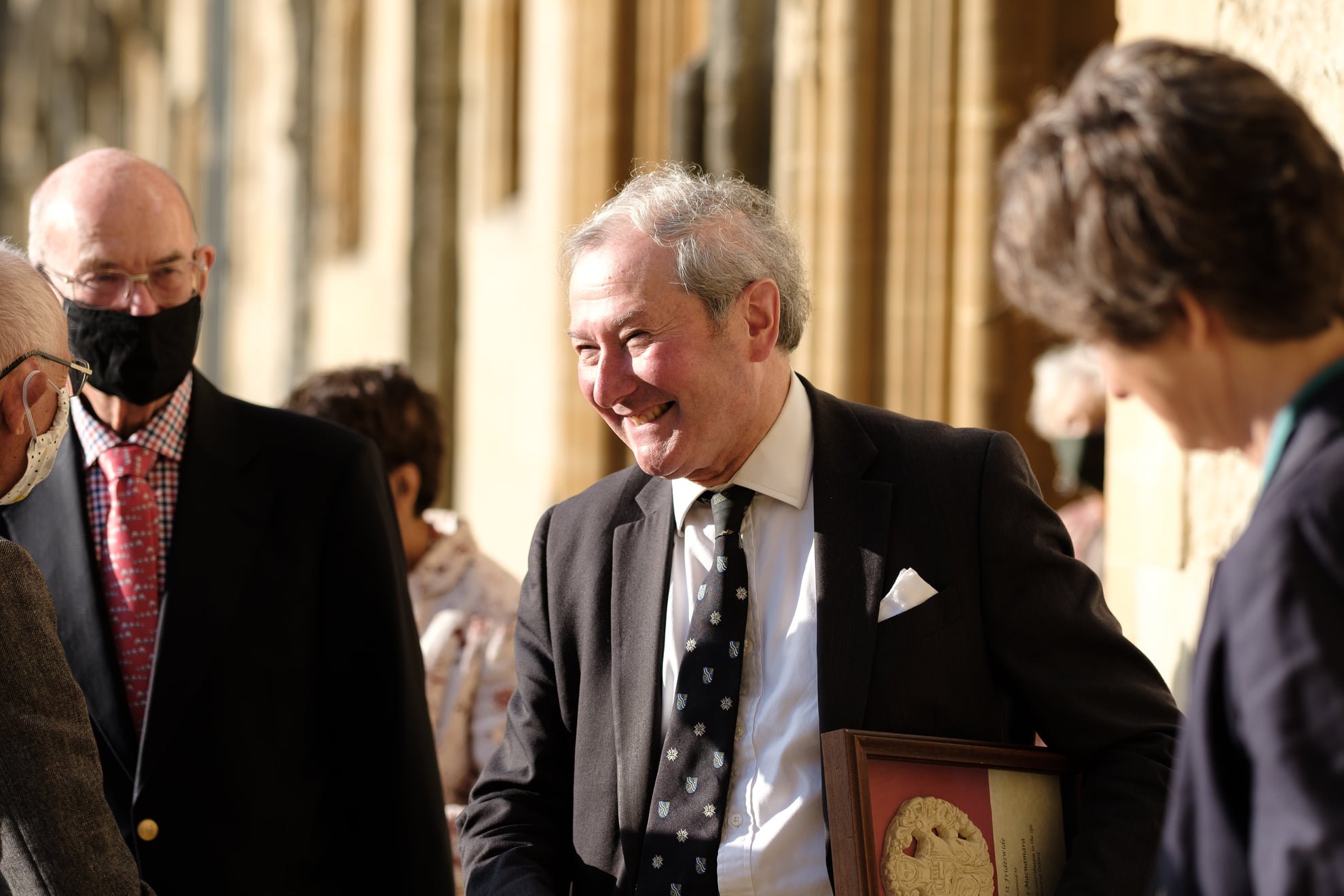 Honours for services to the Church: James Macnamara. Photo by Steven Buckley.

James brings to the diocese his experience as a chartered accountant, finance director and trustee of national charities, including Queen Mary’s Roehampton Trust and Servite Housing, and of service as a district councillor, magistrate and trustee of Dr Radcliffe’s Foundation and the Lower Heyford Relief in Need Charity.

James is also on the investments committee of the Oxfordshire Historic Churches Trust. A long-standing churchwarden of St Mary’s Lower Heyford, he serves on his Deanery Synod and has served several terms on Diocesan Synod and Bishop’s Council, contributing to committees concerned with housing, land, finance and investment.

“Service should be its own reward but working with wonderful people in the Oxford Diocese has always been fascinating and great fun, so being honoured for it, as undeserved as it is unexpected, is an absolute delight.”