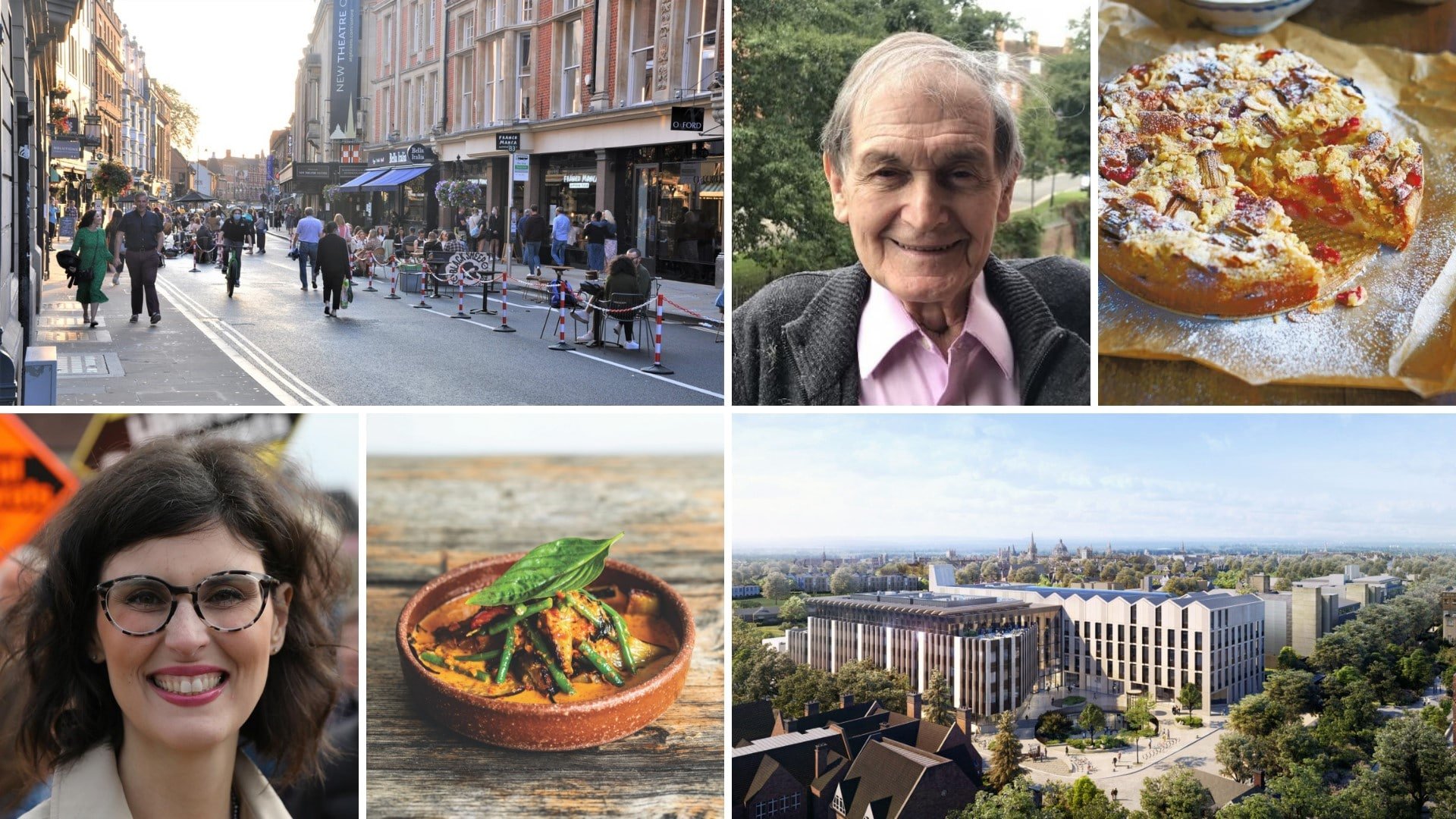 Images from some of our most read stories in 2020

Hindsight is 20/20. Never has this saying felt more relevant. And pandemic or not, Oxfordshire had so many stories to tell last year, as chronicled by our magazine editors. Join us as we reflect on some of our most read stories in 2020 - a year full of unexpected challenges.

In January, Layla Moran, the MP for Oxford West and Abingdon revealed that she identified as pansexual, and was in a relationship with former Lib Dem press officer Rosy Cobb. Layla, who had previously been in relationships with men, explained that she identified as pansexual because “it doesn’t matter about the physical attributions of the person you fall in love with, it’s about the person themselves".

In February, work started on the construction of Didcot Quarter - the largest industrial development in South Oxfordshire for over 20 years - with the development of two major speculative industrial units to provide 310,000 sq ft of distribution and logistics space.

In March the first devices from the Government’s ventilator challenge rolled off a production line in Abingdon. The first batch of the Penlon ventilator device, which was rapidly adapted from other existing ventilator designs received approval from the MHRA that it met the necessary safety requirements. The news came as some of the biggest names in manufacturing in Oxfordshire raced to step up ventilator supplies to help protect the NHS and save lives throughout the coronavirus pandemic.

In April, much of the news was dominated by the COVID-19 pandemic. Many of our local biotechnology companies joined in the in vaccine development efforts. Oxford Biomedica joined a COVID-19 vaccine development consortium led by Jenner Institute, University of Oxford to rapidly develop, scale-up and manufacture a potential vaccine candidate for COVID-19.

In May we saw the award-winning entries in the 2020 Beautiful Blenheim Photography competition. Launched on the back of a successful exhibition in 2019 in collaboration with the International Garden Photographer of the Year (IGPOTY), shutterbugs near and far, are invited to use their photography skills to capture the enduring beauty of Blenheim Palace and the majesty of the 2,000-acre Capability Brown designed landscape that surrounds the palace. The winning entries are truly stunning.

In June, Oxford University announced it had received a landmark £80 million donation from the Reuben Foundation. The donation will help transform Oxford’s newest college and establish a major new scholarship programme for graduate and undergraduate students. The university established its 39th college – the first for 30 years – as a new base for graduate students eager to embrace opportunities for interdisciplinary exchange and the application of research to addressing key future challenges.

And still, on the subject of Oxford University, we had a first look at the design concept for a £200 million Life and Mind Building to replace the now-demolished Tinbergen building on the junction of St Cross Road and South Parks Road in Oxford.

The Tinbergen building was the largest teaching and research building in the university before its closure in February 2017, due to the discovery of asbestos. Its replacement will be the largest building project the university has ever undertaken. The new building will be home to the Department of Experimental Psychology, and a new Department of Biology combining the existing departments of Plant Sciences and Zoology.

Proposals to transform the Boswells building in Oxford City Centre into a 4-star boutique hotel were unveiled in July as part of a partnership between developer Reef Group and Oxford City Council.

The 282-year-old department store had announced its closure in November 2019. The Store Hotel aims to provide much-needed new hotel and restaurant facilities in the city centre to help attract tourists and other visitors to Oxford in the aftermath of the COVID-19 pandemic. The plans include co-work facilities, a restaurant, a bar and a rooftop terrace with panoramic views of the city’s iconic skyline, all open to the public.

Being privileged enough to work from home also meant that much of the social side of work - in-person interviews, Council meetings at City Hall, meals, coffees, concerts, bars, whatever - vanished. So, like many city centre visitors, there was a heartfelt welcome in August when Oxford City Council part-pedestrianised George Street to support local restaurants and cafes. The feedback from this initiative has led to the pedestrianisation of The North Parade.

Blenheim Palace - home of the 12th Duke and Duchess of Marlborough - has a long tradition of successive generations collecting and displaying contemporary artwork. And once again, in September, Lord Edward Spencer-Churchill filled the palace with modern and contemporary paintings

The exhibition by acclaimed British Artist Cecily Brown is made up entirely of new works inspired by the palace’s collection with British heritage and aristocracy as a subject. And we were lucky enough to have been invited for a private visit.

You know how food tastes better when made with love? This has been scientifically proven. Just kidding. In September, local restaurants shared their top recipes in Food & Kindness, a cookbook to raise vital funds for Sobell House hospice during the coronavirus pandemic. The recipes all are pick-up food, easy to serve during 'these times' to friends and family. Buy your copy here (or give as a gift, it’s such a cool Oxfordshire community cookbook).

More than just the result of Philippa having a good eye for photography, each portrait exuded a certain sense of courageous calm. The stories could best be described as a distillation of intensely personal open and honest conversations between the photographer and her subjects.

Later in October, Oxford City was placed into local COVID alert level Tier 2 – High Alert with the rest of Oxfordshire in Tier 1; but days later, a 4-week national lockdown was announced. All of Oxfordshire (including Oxford City) was moved into ‘Tier-2: High Alert’ local restriction post the national lockdown on 02 December, and then into a new Tier 4 on Boxing Day.

Also in October, this year, three Laureates shared the Nobel Prize in Physics for their discoveries about one of the most exotic phenomena in the universe - the black hole. And one of them was Oxford Mathematician Roger Penrose. Roger is Emeritus Rouse Ball Professor of Mathematics at the University of Oxford, and emeritus fellow of Wadham College, Oxford. He received the award “for the discovery that black hole formation is a robust prediction of the general theory of relativity.”

In November, Cafe Loco, a family-run cafe on St Aldgate’s in Oxford, closed its doors after 16 years due to the lack of tourists visiting the city this year. The cafe relied on tourists for 90 per cent of its trade, but there was a dramatic fall in people visiting the city this year as a result of the pandemic. Later in November, we revealed that the Rhubarb and Raspberry Crumble Cake Recipe was one of the most viewed recipes on The Oxford Magazine.

In December, Health Secretary Matt Hancock announced that Oxfordshire was going into the new Tier 4 level of restrictions - which included a "stay at home" order - from Boxing Day. Oxfordshire was joining many neighbouring areas in the south-east of England (including London) already in Tier 4.

By the end of the month, it was a relief to be able to 1) pull together some positives from the unexpected challenges we faced in a year when all aspects of our everyday lives and our society were upended in unimaginable ways, 2) pull together a list of the Oxfordshire people recognised in the New Year Honours List 2021, and 3) to hear that the Oxford-AstraZeneca vaccine got approval for use in the UK, with the first doses due to be given in the New Year amid rising coronavirus cases.

Now, that's one year for the history books.